Socialist emulation was not a sophisticated way to compete – rather just a competition in raw man power. The complexities of management and business organisation completely evaded the Party. Workplace commissars wanted to produce mile-stone numbers following five-year plans: 10 thousand tons of iron ore, 10 million hectares of sugar cane, 100 thousand livestock born. (The phenomenon is not unlike today’s quantitative fetish, and just like that, it also entailed plenty of fabrications and loose definitions.) Workers were made to compete in tons of dirt moved by manpower, meters of tunnels dug out per day, and other such well-quantifiable measures. Not surprisingly, it didn’t boost output.

Socialist emulation was meant to be voluntary.[1] In reality, “socialist self-obligation” was fiercely enforced by peer pressure, state security, and the workplace representatives of the Communist Party. Instead of management consultants, the Soviet Union exported experts, who taught how to organise work competitions. Propaganda films showed good socialist workers competing in work emulation, and (after much noble struggle) overcoming imperialist sabotage. 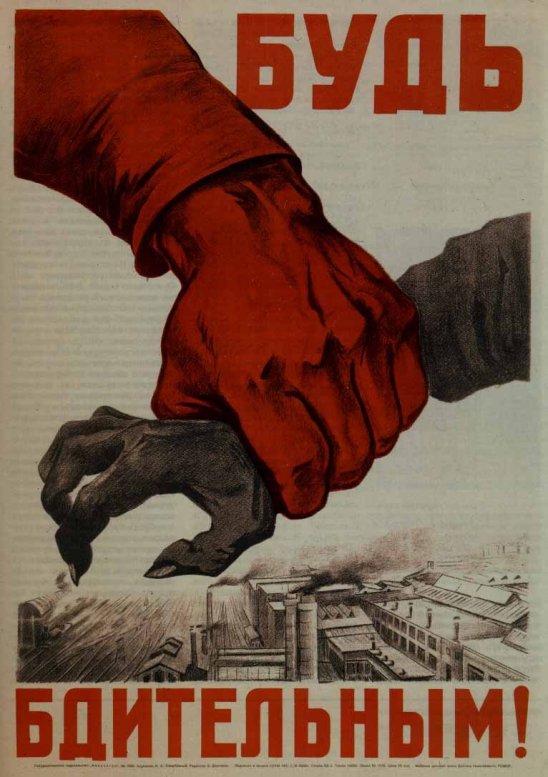 Be on guard! “Saboteurs” trying to sabotage work in the Soviet paradise. (Image source)

Which leads us to the basis on which communist ideologues denounced competition: their view and definition of competition.

Why did socialists denounce competition?

In short, they equated it with sabotage.

Their socialist emulations as well as their representation of capitalist sabotage tell volumes about their definition of competition. Their propaganda never failed to picture capitalist spies and imperialist agents as saboteurs. It was as if sabotage itself would be at the core of capitalism.

And competition – as defined by socialist ideologues – would indeed only produce sabotage.

Opponents of competition have a damning definition of competition that does  not entail merit, value creation, innovation, or improvement of anyone’s life. It merely means the obstruction of others. When they talk about competition, the term “cut throat” keeps popping up. Far from a tool of (or motivation for) innovation, they regard competition as a way to destroy competitors. To destroy value.

Opponents of competition chose to interpret it as any means to get above others. Pushing others down is as good as any. If you only want to be better, not good, thwarting others is a perfectly valid method of achieving it.

From this angle, equating competition with sabotage is logical and inevitable.

Proponents, on the other hand, regard it as a means to become really good at something. In the Hayekian discovery procedure competition means ever getting better, discovering novel ways of doing things, innovation, and improvement of lives.

Confusing competition with the lack of inner standards

At the core of the divergent definitions is the locus of one’s standards. People who don’t know good, only better, are a poor advertisement to competition and its ability to improve lives. This interpretation means cronyism, a cartel or monopoly in business – and clinging on to power and control in politics. Regardless of the costs to the economy.

But good is better than just better. You don’t stop running when you overtake everyone – you  want to find out how much faster you can get, and if you are really the master of your own standards, you also know where you are trying to get to. The reward is not to be better in comparison, but to be good – and being well paid for it.

The authoritarian mind abhors the notion of competition. It would me a mistake to only see it as a socialist thing though. Right wing authoritarian regimes are not exactly paragons of honest competition either. It may be exhibited in different ways, but authoritarianism of any kind abhors real, innovative competition in the sense of Hayekian discovery procedure.

It happens for a number of reasons:

1. Competition means that hierarchy can be challenged

And that is unnerving. An authoritarian needs hierarchy to provide the illusion of control and thus safety. He uses hierarchy as a proxy for certainty. A stable hierarchy means safety to authoritarian ears and they are known to reject freedom in favour of safety.

An authoritarian will seek out hierarchy even where none exists and he will place you in his own hierarchy even if you refuse to place yourself. It lends him the illusion of knowledge about you. From this perspective, hierarchy is meant to serve the function of reputation in facilitating trust. The absence of hierarchy is anarchy – which is synonymous with chaos and violence for authoritarian minds.

The more stable a hierarchy is, the better. If a hierarchy can be challenged by effort, his own place might change as well. The bottom of certainty falls out and the opportunity to rise is no consolation. Authoritarianism is about survival, after all, not aspiration and prosperity. Hence populists’ efforts to stoke the sense of emergency and remind us of existential threats all the time.

At the end of the day, competition means the freedom to change the status quo – as opposed to the certainty of a set hierarchy.

If you identify with your place in the hierarchy and don’t take it as a result of effort or merit – you will resist the idea of competition. In this world view you either get rewarded based on what you are (your status) – or don’t get rewarded at all.

3. Learned helplessness vs. the premise of individual effort

Authoritarian thinking rests upon the idea that the individual is powerless (hence the need for a strong leader). Disempowerment (learned helplessness) of the authoritarian follower is at the core of authoritarianism and it dictates that no individual is in control of his outcomes. This notion clashes with the idea of merit-based reward.

Learned helplessness is not just internalised by authoritarian minds – it is also projected at others. Concern for others – and in particular, deeming them incapable for caring for themselves – is a less obvious symptom of the same thinking. Either way, the notion that someone wants to / expects us to rely on individual efforts is outrageous for both kinds of authoritarians.

Competition in a market of voluntary trade may inherently also be cooperation, but authoritarian minds will always see the cut-throat element only. Job creation is an alien concept when your metrics are tons of dirt to move mindlessly. (Your way forward is to move it slowly or, indeed, with a spoon, if you are to create more jobs.)

5. Need for homogeneity vs. Specialization

The idea of fluid rankings based on all sorts of comparative advantages is alien to authoritarianism on a number of levels. One of them is that it clashes with their need for homogeneity. Anti-pluralism is an oft-discussed trait of the authoritarian (populist) mind, but homogenising others is only really desirable for those who are made to fear otherness. Specialisation is a challenge to homogeneity. It means both vertical (skills) and horizontal differences (in income levels).

In terms of achievements, the only way to achieve homogeneity is to pull back the achievers. That is the worst of both worlds.

6. The inherent collectivism of authoritarianism

If we mean collective success, competition should be performed by the collective. Incentives are misplaced and the tasks have no owner. Only a culture that rewards individual success can make competition work.

[1] The Hungarians seem to have missed these nuances though. They translated “socialist emulation” (or социалистическое соревнование) simply to “work competition”.

2 thoughts on “Good is Better Than Better”