Örkény is not even near the most disadvantaged regions in Hungary but the proportion of underprivileged and extremely underprivileged children in Örkény’s only elementary school is 50% and 80%, respectively. These pupils come from understimulating home environments and families in poverty – often from the gypsy community that is routinely segregated in real life as well as in education. Many of the children have never seen an adult in employment.

How does one dedicated teacher motivate these kids to studay hard so that they get a job when they grow up?

Part 2 of the interview. 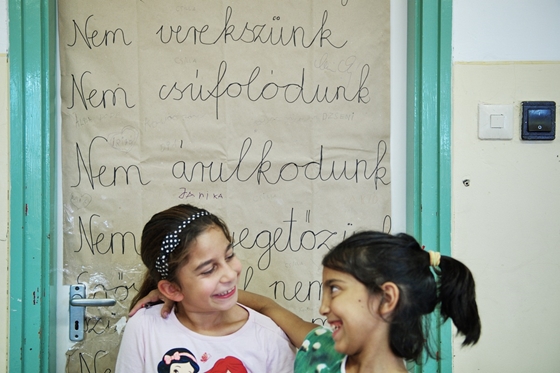 “I find it ridiculous that we paint a vague and distant future for the children. When we tell them that they can be fireman, policeman, or soldier – if you study hard. Yet, they have never seen it in their own lives. So we tell them that if they study their life will get better in the distant future but if they don’t they are eternally doomed. It is ridiculous to talk to children in Hungary (especially underprivileged kids) that they’d have it better if they study. Besides, they, just like the adults, want to live better now. But I need their motivation now.”

Learning about the world of work

The class currency, garas is one thing, but Angela Murinai applied a range of other methods to see what works with her class. They get to move a lot, work in teams and they follow the development of each child individually – with the help of the teaching assistant. (This is not a regular possibility in the Hungarian education system of strict, minute-by-minute curriculum and collective milestones – ed. ) The TA’s status, however, is shaky. Her status had to be renewed every three month because she was employed as part of the government’s public work program, not as a real employee. It was cheaper that way and everyone is doing it.

There are also project weeks when children learn about a specific topics through the prism of one particular profession. Last time it was animal husbandry, but there was policeman, fireman, and ambulance doctor as well.

“The majority of local children has no opportunity to see their parents going to work. There are no jobs, and it is very hard to even get into the public work program. The parents – contrary to the stereotypes – do sit down to learn with their kids. They want them to achieve more than they did – but what is that ‘more’? Even the parents don’t know. The future outlook for girls is to stay at home and raise lots of kids. They can’t even think of anything else because that is all they see in their environment. But boys don’t have it any better either. There is nothing to give them hope, to encourage and inspire them to study.” The school thus introduces them to real world professions.

“Maybe the use of money combined with hints about their possible futures will create the link and plans could be born on how to leave poverty and find a point of learning.”

But how does it fit into the national curriculum?

“It doesn’t fit in. I am laying low. We somehow get through the mandatory tests and exams, I am trying to prepare the children for those.”

The current government has centralised the education system down to the last chalk. It comes with uniform textbooks, uniform curricula, a centralised, one-size-fit-all learning rota regularly supervised by state inspectors.

From the second year, grades are mandatory. Murinai is afraid that it will cut back children’s enthusiasm. “So far my children believe that they are smart and competent. When I have to start grading them, they might get disappointed and lose heart.”

Children work all week in their personalised notebooks, receive garas for their efforts and hard work, but when Friday comes and they get their grades, and it is not an A for everyone. “The first grading was awful. They immediately started running around and comparing themselves. Those with poor grades withdrew, those with better marks didn’t feel that their joy might hurt the others – even though they have worked the exact same amount. Didn’t happen with garas.”

Murinai believes that the failure of school is really the failure of the system. If the majority of the class cannot learn and cannot complete the tests, then the teacher has to start thinking and see what she’s doing wrong, what could be done better. How could the children get interested? The current system doesn’t allow that.

“In this system I’m supposed to enter the classroom with a minute-by-minute agenda, while children often get hooked on unexpected things. I could turn that interest into a valuable learning experience. I could teach them in a way that suits them. If something doesn’t work, when I see that they’re bored or tired, I can change immediately. You need creativity and sensitivity – and a boss (a system) who trusts the teachers.”

The education system, on the other hand, expects the children to adjust to its teaching methods and expectations – even to individual teachers’. This is extremely exhausting. “And when the child doesn’t manage, we start examining him and label him with learning difficulties, hyperactivity, behavioural issues. It should be the other way around. The teacher should be serving the child’s needs, find the way to them, find out their needs. And the system should give the teacher the freedom and the trust – to be able to do this without breaking rules.”

“The Hungarian education system has put a lot of obstacles before us – but they haven’t banned humanism yet. It is very important to respect the child, his work and feelings.”

“I feel sincere respect towards my children when I see how much hard work they put into their results. I have stopped crying myself. They inspire and push me forward. I enjoy listening to them because by now the safety I gave them has made them feel free to talk, tell stories and express opinions.”

This authoritarian approach is wrong. “It is not true that you cannot cooperate with children… Everything the school says is not true. … The adult has all the power. The adult has the power to change things. Power he could use to serve the development of the children. As a teacher I have the power to protect them, to defend them, to help their development. A teacher is a mere gatekeeper. He is not even necessarily right. But he has the opportunity to create a positive environment, and to show the children all the things they can do. He can open the door for the child to see the world – so that he can make decisions about his own live.”

“I believe that it is the teachers’ job to open the doors to the world wide and let the children tell what they see. Even if it’s against the worldview of the teacher. But instead of this the Hungarian education system is a system of coercion. It does not serve development – it is designed to clip the undesirable branches. It pushed children down, suffocates them, and they then fail to work under constant stress. The grading system prefers those who don’t even grow branches but manage to force themselves to fit the expectations. If someone sticks out, they become a reject, even if they have the best heart in the world.”

“The children are not ‘getting ready for life’. They are already here and living. Now. They want to feel good now. Every minute they spend in a bad mood, with bad feelings is wasted, ruined. Ultimately, knowledge shouldn’t be a painful and hard-to-obtain thing. Knowledge is fun and so should the way of getting it be.”

3 thoughts on “Teaching Underprivileged Children About the World of Work”