Hungarian and foreign investors are buying apartments in bulk in Budapest at prices still below their pre-crisis peak and in the hope of robust returns. Wherever one looks online, from Bloomberg to Google Ads, double-digit returns are promised on Budapest properties.

But the two things that supposed to deliver their double-digit dream yields are shaky. 1) Tourism may be peaking, but it won’t be enough. 2) The purchasing power of locals is tanking in the meantime – both as buyers and as renters.

There’s everything on this list – apart from fundamental strength and a healthy demand that is also able to pay.

Before the crisis in 2008, it was the Spanish and the Irish buying up Budapest properties in bulk – then that demand collapsed alongside the mortgage market of their home countries. Since 2014 investors make up a growing part of the housing market again. In April 2015, 32% of buyers said they purchased housing in Budapest as an investment, up from 21% in 2014, according to one agency.

Talking to agents and property owners in downtown Budapest, there is plenty of anecdotal evidence of another trend. Foreigners, most visibly Chinese investors buy properties by the dozen. Partly as a safety bet from turbulence at their home markets, partly as a result of the government’s press campaign to push Budapest properties to foreigners, and last but not least, their generous residency permit program, that sells residence permits to non-EU citizens in exchange for buying at least 300 thousand euros worth of government bonds – and investors follow up from there.[6]

As a rule, the more developed and predictable a property market is, the lower the return on investment. London, for instance, is a very good example with its 3-4% expected annual returns in the inner boroughs – despite the massive prices. Outer districts, however, can see better yields – and so can less developed markets, such as Budapest. The Hungarian government commits everything in its power to attract foreign money into the Budapest property market. The government’s official website dedicates a segment to data on double-digit returns and catchy descriptions on “Bauhaus architecture” and “ridiculously cheap” places downtown.

The price drop following the financial crisis, coupled with the weakness of the forint and low interest rates globally have come together to create the perfect storm – and prices have seen an unprecedented rise. Property price waves tend to start with increased foreign interest, followed by the locals catching up – and ends with every liquid asset locked down in properties. With the current rush towards residential property investment funds this seems to be the case – questioning the sustainability of the model.

Statistics only count foreign investors outside of the EU – data on intra-EU investments are not available – but 2015 has seen a 50% rise in these kind of investors (to near 4000 transactions), adding up to more than 2% of all transaction. In downtown Budapest, the number is closer to 20% – not including the transactions by companies and other legal entities (foreign or Hungarian) owned by foreigners.[7] In 2015 31% of transactions to non-EU foreigners went to Chinese, another 22% to Russians. 69% of these transactions were concentrated in the capital.[8]

Just as the above macroeconomic factors, these global financial developments are also out of the control of an average Hungarian buyer or tenants – yet they are expected to pay the price.

Finally, the absence of new homes being built compounds the bullish effect of the above factors. 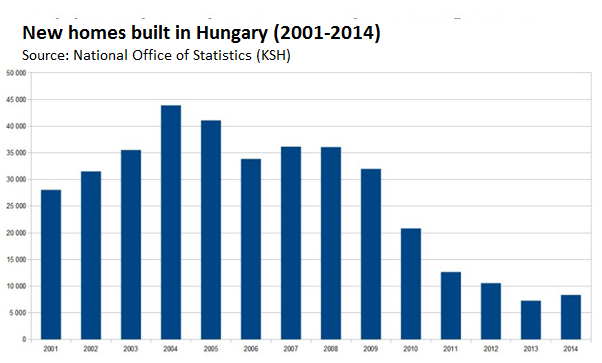 The low purchasing power of locals

The low purchasing power of locals is another field the government would rather not have us discussing – even though that has more to do with Hungarians’ inability to afford a place in Budapest than the few hundred Airbnbs downtown.

As of 2016, the average take home pay in Hungary is 516 euros according to the Office of National Statistics. Naturally, there are regional differences and Budapest comes top, but it still puts a break on the rental price locals are able to pay.

While rental prices have grown up to 30-40% in certain parts of Budapest year-on-year between early 2015 and 2016, net wages have only grown by 6% in the meantime. That is not sustainable.

Due to the low purchasing power of permanent tenants, it is highly questionable whether the Airbnb business model is sustainable in the long run and tourism alone can keep delivering these returns. The model may not be sustainable – especially if we calculate with the solid emigration pattern. Rising rents in economically viable regions and the capital add to the already mounting motivation to look for a better paid future elsewhere. If not even housing is cheap in Hungary, what stops people from leaving? That, in turn, will leave Hungary with low-income workers and relatively affluent tourists – and rent-seekers ever more desperate to make it work.

If wage levels don’t catch up with European standards, Budapest cannot sustain this property boom. Hungary is already suffering from decreasing competiveness – because even though there are plenty of unemployed, even low-skilled sectors suffer from brain drain from abroad.

The first part of the analysis about the extent of the boom can be found here. More about the government’s ill-conceived homebuyers’ loan policy, and the real size of the Airbnb impact coming soon.

[6] The program has been recently revealed to sell an instant resident permit to basically anyone who buys 300 thousand euros worth of government bonds through the offshore companies of certain government-friendly lawyers. (Scandals also implicated the mayor of Budapest’s 5th district, which is the epicenter of the property boom.) 3647 residence permits have been sold that way since 2013 (to the end of June 2016), 85% of them to Chinese, 7% to Russian clients. Source: HVG.hu http://hvg.hu/itthon/20160510_Magyarorszag_varja_a_betelepuloket http://hvg.hu/gazdasag/20160209_letelepedesi_kotveny_offshore_Rogan_Wiedemann

6 thoughts on “Budapest Property Boom – Why?”