A week-old decomposing body was found in the bathroom of a hospital. The second this week. Weird, considering that even gas stations are required to clean their bathrooms every half hour. And then we learned that Hungarian hospitals are only required to clean them every other day.

Still, a week-old corpse is an outlier of which two seem like a new trend. 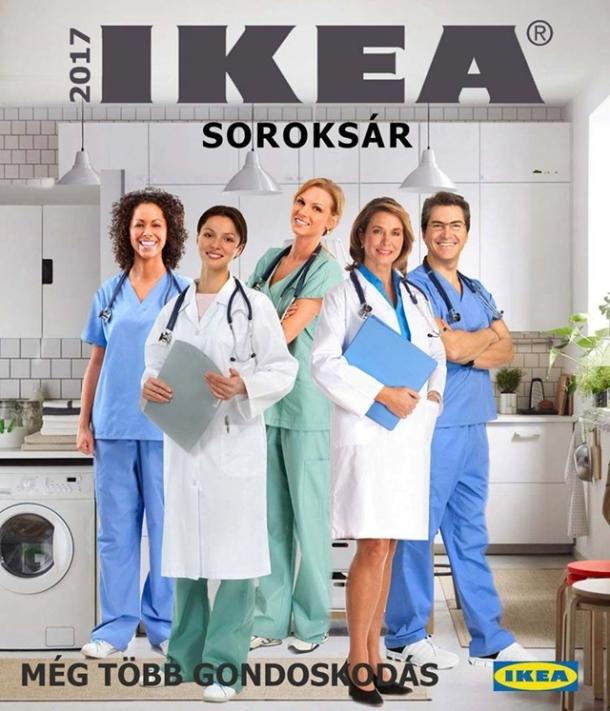 In June 2017, multiple hospital departments have been shut down countrywide due to critical shortage of staff. One team of Jahn Ferenc hospital went to work for a nearby IKEA for more money. Image: Digital folk art

Hírcsárda, the Hungarian Onion was quick with the headline “Living body was found in a Hungarian hospital – Investigation in progress” and everyone understood. Whenever the discussion of healthcare is unavoidable people are half-joking that if you find yourself in a hospital it’s already too late. But it was a long process. It all started with free and universal  (and unsustainable) healthcare promised under communism.

Sometimes a patient is treated with broken arms but dies from a stomach bug caught in the hospital, or a child ends up on breathing support because therapy-resistant bugs infected him during a routine tonsillectomy.

Oliver Stone, myth maker and activist, was kind enough to suck up to the dictator Fidel Castro who destroyed his country in the name of communism. One of Stone’s many sins is presenting the state-sponsored Cuban healthcare system as superiour. US public debate appears to be polluted by this myth. So let me give you a few very representative stories from recent news on how the universal and “free” healthcare system plays out in the long run. And just how expensive it is. In money and in human lives.

There are hospitals where even sterilization has stopped, the toilet cannot be flushed, patients cannot be isolated, there are no clean diapers, disinfectant, and the management cancels cleaning because there is no money for it.

Doctors also demand the publication of real statistics regarding the system because they no longer believe the official numbers, and to remove the supervisory authority from under ministry supervision. Again, the stupefying centralisation efforts of the Orbán-government don’t just dissolve education – they also claim lives.

Hungarians are used to universal free healthcare – as a communist relic. Today we get to see the last days of the system: it became  corrupt, lethal, and very expensive. And by very expensive I mean out of pocket – and on top of the social security contributions.

An exodus of underpaid doctors and nurses, who’ve emigrated by the thousands to richer western European countries in recent years, has left behind overworked and underpaid colleagues at state hospitals. Hungarian governments have chipped away at health care spending, bringing public financing to 10 percent of budget spending by 2013, the lowest level among 34 OECD members. Partly as a result, Hungary has the highest mortality rate from cancer, and the lowest number of CT and MRI scanners among OECD countries.

And indeed, the government is perfectly free to not fund hospitals. Nurses and doctors are not allowed to strike – not that they could without immediately letting patients die. And when a nurse started wearing black to demonstrate against the death machine hospitals have become – she had been harassed and eventually fired for speaking up and being pesky. When she organised a very tiny protest on a bridge for 5 minutes she was ordered to do public work. The same week(s) taxi drivers have blocked the city for days to protest competition. (The thousands of taxi drivers did not get sent to do public work, just in case you were wondering. Government banned Uber for them.)

Obscenely, the government cannot stop funding football stadiums  and international sports events, such as the 2017 FINA world championship (4 times over budget as of today) and an already shockingly expensive application for the 2024 Olympic games. And no, the comparison is not demagogic. Even the emergency reserved of the budget go into stadiums these days. And when 50% of your salary is taken in taxes, and free and universal healthcare is promised in return, it is your business whether stadiums or disinfectants are bought.

Free and universal healthcare seemed to work for a while, but eventually they ran out of money and can’t even borrow anymore. Hungarians ended up paying twice for a service of declining quality: once in social security, and once in bribes.

Or they may go to private hospitals – also out of pocket.

The lack of government investment has forced Hungarians — accustomed to universal health-care coverage since communist times — to dig deeper into their pockets. Private spending made up 35 percent of total health spending by 2013, the highest level in central Europe. Much of that has been so-called “gratitude payments,” money slipped by patients to doctors and nurses at state hospitals in hopes of getting better treatment.”

A shopping cart used as hospital bed for children in the hospital of Szeged. Please don’t start to celebrate human ingenuity like government trolls did in the comments sections…

In 2016, the government had the marvelous idea of building a massive private hospital.

Bloomberg is rightly delighted to see private investment into a private hospital in Budapest – but there are three caveats:

As a wise celebrity once managed to say, hospitals don’t bring the nation together…

Meanwhile, in a Bristol hospital…

8 thoughts on “The Last Days Of Free Healthcare”