Hungary is supposed to be a very happy place – if we are to believe the inequality warriors. Income distribution is so flat that 32% of Hungarians belong to the middle class (defined as 80-120% of the median income) – according to ILO (2011) – and over 75% earns between 60-200% of the median income (2014, pdf). That puts Hungary firmly in the least unequal societies within EU and OECD. Except for one tiny problem:

The Hungarian middle class is not middle class in the sociological sense of the word – i.e. in terms of purchasing power. People on median income have trouble:

The existence of middle class it is widely accepted to be crucial for stable liberal democracies. (“Democracy” in this sense is not to be confused with majority voting which does not constitute a democracy – merely a deeply flawed selection mechanism for representatives who then make decisions. Also based on the majority principle.)

A certain level of wealth (the size of the middle class, better and widely accessible education) is a prerequisite for a stable democracy, but does not necessarily make it happen. The sense of economic security and control is what matters for political stability and trust in the system. The disappearance of a middle class in terms of purchasing power and the sense of economic security is what breaks down a democracy, not mere income inequality. Define the problem wrongly and you contribute to ti. That is what every populist does, whether they know it or not.

And this is why people stuck on mere statistical income inequality should seriously shut up already because it is misleading the conversation and thus policy. When the absolute income of these varying middle classes are put next to each other, the image gets more meaningful. 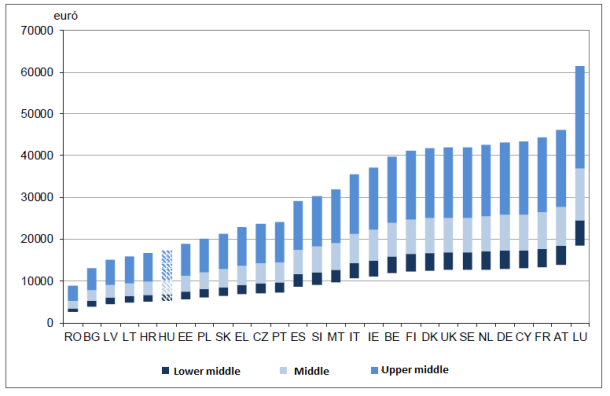 People, who stand at X level of income distribution don’t vote for populists. People who cannot afford medicine to their children do. People who are statistically defined as lower class are not empowering a strongman to do something already – people who feel helpless about shaping their own future do.

In other words, poverty matters – and even more than that purchasing power matters. And economic security and control. (But no amount of basic income will give that back.)

No, inequality does not break down a democracy. Poverty and economic insecurity does. If you mindlessly repeat the wrong diagnosis, you contribute to the problem.

7 thoughts on “Equal But Poor”