Do self-respecting, civilised cities even apply for Olympics anymore? While economically responsible countries increasingly declining to organise this ever-more shameless corruption bonanza – Hungary is going above and beyond for the dubious honour.

Because let’s face it, wherever 9% of the GDP is spent on something as vague as national grandeur, a few percent will drop for every crony here and there. 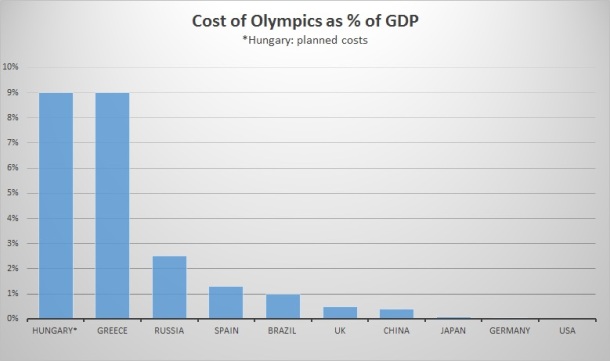 5 billion forints have already been spent on studies – such as this one from dear PwC (pdf, 1372 pages) – that concludes that it can be done within budget and not break the country. Unless there is some corruption and overpricing. How reassuring… (The word “corruption” only features twice in 1372 pages.)

Well, for context the costs of the 2017 water sports world championship (also unfortunately organised in Budapest) had already overshot their original EUR 300 million budget by 400%. And it is only January 2017 – imagine spending in the last minute rush when nothing will be spared to show the guests our greatness…

A similar overpricing stunt would increase the actual costs of the 2024 Budapest Olympics to 36% of the country’s GDP – and that’s without the projects organisers prefer to keep off their books. The things ‘the people’ are supposed to benefit from. Must be a huge benefit. Not sure exactly which ‘people’ they meant though. The cronies of today will probably be dismissed and fall out of the mercy of Orbán. And that is exactly why the new set will be hungry and eager to “win” a many “public tenders”as possible.

And those who win  with the best offers? Well, they can always ask the right person to “correct” the price upwards after the contract is signed. If it works for petty, municipal tenders – it works for gigantic ones, too. It is even politically safer when you steal amounts that are easier to express as % of GDP.