The human mind abhors the absence of control – and does everything in its power to avoid the sense of helplessness. When it cannot avoid it, it performs mind tricks to not to have to acknowledge it. One of these tricks is never seeking fault in the stronger, and never taking the side of the underdog, not even by accident. If you happen to agree with the stronger, there is no need to intervene. Lucky because you couldn’t do it if you wanted to. 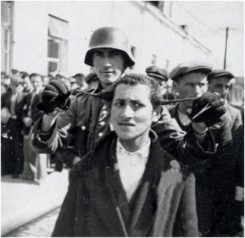 The two pictures have one thing in common: bullying. Anyone witnessing the bullying girl in school would be quick to intervene and give a sanctimonious speech about not hurting others.

But witnessing the German soldier mocking an Orthodox Jew’s hair in Payots (Soviet Union)in 1941 would be a different story entirely. It is bullying on steroids. And yet, we may be inclined to explain it away. Why did the Jew go on the street if he knew he would very likely be mistreated? There must be a reason Jews are persecuted from the highest levels. Maybe the Jews deserved it somehow.

The difference between the two situations is not whether the Jews or the little girl had deserved being bullied. It is whether we can do anything about it. Blaming the victim is only necessary when we are not in the position to rectify the situation. Otherwise we would. When the weak is already victimized, the thinking pattern is visible. But authoritarian thinkers tend to take the side of the strong before even the confrontation.

Adorno included among the authoritarian personality traits the “contempt for everything discriminated against or weak”, what would be later called “blaming the victim”. The concept of victim blaming was later used to describe the rationalization of slavery, racism and practically every social injustice. But it also applies to a variety of things ranging from rape to the abuse of power and oppression. Victim blaming is also deep in our cultural DNA. There are plenty of examples in the Old Testament in which tragedies and catastrophes are justified and blamed on the sins committed by the victims, or merely on a fault in their character (or that of their ancestors).

Melvin Lerner considers the motivation for victim blaming to be a distorted form of the just world hypothesis[1]. From childhood onwards, we are bombarded with the message that good is rewarded while bad is punished. We carry this notion into adulthood and need an explanation for injustice when facing the cognitive dissonance of an innocent victim. Rational strategy would be either to accept the reality of injustice (and thus one’s own helplessness), or trying to prevent it or provide restitution. Non-rational strategies include denial, withdrawal, and the reinterpretation of the event. This is where victim blaming comes in handy.

Lerner saw his work as extending Stanley Milgram’s work on obedience. He wanted to understand how regimes that cause cruelty and suffering maintain popular support, and how people come to accept social norms and laws that produce misery and suffering. His research was influenced by repeatedly witnessing the tendency of observers to blame victims for their suffering (Lerner 2002). But that may not be enough to get to the bottom of disdain for the weak.

When a kindergartener bullies another, we can step in, tell the bully off and make justice. There is no risk in taking the side of the victim. When in 1943 we see a Nazi soldier twice our own size beating up a Jew in the Warsaw ghetto, we are not in the position to rectify the situation. We are helpless, so we blame the Jew to save face. If we could just step in and stop the nonsense, we wouldn’t need the mental comfort of looking for fault in the victim. It is not about the justification: not about law or justice. It is about might.

Authoritarian aggression towards the underdog is not limited to victim blaming. A victim is just a specific case of the underdog – and authoritarian aggression towards the underdog is more conspicuous when someone had just been hurt. Authoritarians only attack those, who are weaker, whether they happen to be victims or not. But attacking the weak they never fail to do.[2] In the case of victim blaming the double standards and the real mechanics of authoritarian thinking are plainly visible: It is psychologically uncomfortable to find fault with a more powerful entity because it would require to challenge it in order to keep one’s own sense of integrity – or admit helplessness. To avoid this uncomfortable feeling, something must change – and the only thing in power of the unfree person to change is his own opinion. If he finds fault with the Jew (“Why did he stop on a sidewalk, when he knew that anything out of line could be punished?”) he no longer has to challenge the bully to rectify the situation. He may have no control but he just convinced himself that he didn’t need control anyway. The powerful does exactly what he wants it to do.

Victim blaming is only necessary when one is not in the position to prevent injustice. It serves multiple purposes:

Attacking the weak thus provides a (false) sense of safety as well as the illusion of control.

But being the victim/underdog provides no automatic insight into the fallacy behind the disdain for the weak. In fact, it tends to have the same effect. Authoritarian victims also blame themselves.

Victimization and the sense of not being control often induces the state of learned helplessness. It induces emotional numbing and passivity. Victims may learn during their victimization that resistance is futile or it makes things even worse. This conclusion can either be the source of their expectation of future response-outcome independence (helplessness) (Peterson-Seligman 1983), or it may strengthen their belief that the victim is to blame for whatever happens to him (rationalization).

The impact gets even worse when even victims of oppression despise one another. They also “know” that their kind is unreliable. They have been seeped in the same implicit, unchallenged assumptions, so they also help enforcing them – due to a mixture of misplaced identities (identifying with or taking the side of the strong, the oppressor, the leader, the exploiter) and a desire to be approved by him.

It is also a trust issue. Horizontal bonds of trust between oppressed people are weak because they know for a fact that the other one is an underdog too – lacking resources, influence, sometimes even rights – and thus the competence to change things. The opportunities in cooperation with other underdogs are thus discounted. Eventually oppression makes its own justification come true.

Justification for the submission or victimization of entire groups is also a glaring example of this thinking pattern.[3] [4] [5]

People, who feel helpless in the face of injustice tend to blame the victim. Authoritarian thinking will invariably jump to the conclusion that the weak is to be blamed. It will have very compelling arguments to support this conclusion, but it was the conclusion that came first.

The need to find a reason as to why the victim is to be blamed is desperate. The authoritarian state of mind will never end up looking for fault in the actions or character of the powerful, not even by accident. The authoritarian mind never dwells upon the fault in the aggressor. It may be rape, murder or an entire genocide, his mind will immediately wander to find the counterintuitive reason why the victim had it coming.

On the other hand, fearless people or those who are used to justice being served generally stand with the victim by default. They seek right, not might and principles are not suspended as luxury.

Featured image: “He is guilty of the war” – 1943 anti-Jewish poster by Mjölnir

[1] The just world hypothesis is the unspoken assumption that consequences are always fair, predictable, and proportionate to the cause – while rewards and punishments befall people according to their actions (or character). The specific behaviors and attitudes rewarded or punished always happen to be the norms and ideologies of the society in question. For people and societies, belief in a just world is crucially important for their well-being. Lerner explained what strategies people use to eliminate threats to their belief in a just world.

[2] Authoritarian thinkers don’t need a reminder not to beat up a policeman twice their size to modify and correct his behavior – but they can’t see why they shouldn’t do just that to humans, who are weaker and exposed to them, such as children, slaves, scapegoated ethnic minorities, or women. It is obvious that the need for correction (or the likelihood that it works) is not the qualifying factor when they decide whether to beat someone up – it is the strength (authority and physical power) of the opponent. The policeman and the Nazi soldier are not only stronger, but also representatives of power – a double blow to a hierarchy-focused, unfree thinker, who tends to arrange his opinion according to strength and power.

[3] One can observe the notion in works when people blame the poor for their poverty – with complete disregard to structural forces that make it harder for certain individuals to change their situation, when people blame NGOs that fight for transparency and human rights for a government crackdown against them, or when they rationalize the punishment of whistle-blowers. It also works to justify violence, racial or gender-based prejudices, bullying, and even illnesses. We cannot even tolerate the thought that an illness to come to someone without deserving it, it is no wonder we cannot cope with political oppression without seeking justification for it.

[4] Slavery only feels comfortable if one can underline it with rational-sounding arguments, such as the irreparable nature of the slaves, their irresponsibility, and their stupidity – which is also incidentally made true by mistreatment, condescension, and lack of education. One can also make the same argument against sexism – that brands women as the weaker sex en masse – while weakness is the ultimate trigger for authoritarians to have a go at someone.

[5] It is also worth to note that fearless people or those who are used to justice being served tend to stand with the victim by default. They seek right, not might and principles are not suspended as luxury.