Since 2011, the Hungarian government allowed companies to divert some of their taxes – and spend it on sports instead. By 2017, EUR 1.5 billion has gone into sports this way. This is what they call “private financing”. And it doesn’t include public money poured into stadiums, budgetary funds, the exorbitant (and ever-ballooning) costs of the water sports world championship and the application to host the 2024 Olympics. Oh, and there is also some actual, private sponsorship. Some appear to voluntarily support the sports – on top of all this.

The companies that feel obliged to spend their taxes this way are not disclosed – yet it is an open secret that pushing money into the prime minister’s pet projects increases their chance to win public tenders. In fact, supporting Orbán’s favorite football club is not even an option – unless they are specifically invited to. Munching and spitting sunflower seeds with him in the VIP section of his favorite football club is a rare privilege. 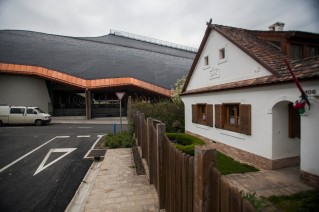 Again, this is the stadium next to Orbán’s birth house in Felcsút, his lucky little village that’s showered in public money and EU funds and hosts a hilariously clumsy and outrageously over-financed football academy.

News site 24.hu ran the numbers and concluded that 414.9 billion HUF (approx. 1.5 billion EUR) has been spent on the five sports (water polo, ice hockey, basketball, handball, and naturally, football). But we will never know which companies lavished their love on what – and what they have lobbied for in exchange.

The amount of tax money diverted into sports equals the annual wage of schoolteachers, the four-year budget of the local medical system, and it could do miracles to the dangerously underfinanced healthcare system. And since all these things are centralized, nationalized or 100% state financed, it is not a demagogy to compare the sums. we are not against lowering taxes – but this is obviously something else entirely.

The government’s priorities are once again detached from the good of the country – or the people living in it. Apart from a few, well-connected football-enthusiasts and those who benefit from their taxpayer-financed largess.

And remember this example every time a government employee claims that something is totally private. Their definition of private is “crony-owned and legally extorted”.