As you probably noticed, this blog is more interested in the mood in Hungary – than in reacting and analyzing the latest policy nonsense.* And the mood is changing.

For the first time, youth are on the streets of Budapest. And for the first time, they don’t solemnly march under boring sings like “Save the education“. They party. And they don’t apologetically wring their hands that “we are not political, we just…” They are magnificently pissed off.

It won’t make a revolution, it may not even influence the elections next year. But it is a big deal.

The most important thing about a youth movement coming out of the blue and stopping the Olympics was not the stopping of Olympic-size corruption – but the breaking of apathy. If you read this from the first world, you may think that a successful campaign to collect signatures calling for a referendum is no big deal. But in Hungary, in 2017, it was.

We have written about the curious blend of apathy and cynicism and how it came to influence Hungarian politics. For historic reasons, Hungarians in general feel unusually helpless and disinclined to go against power. And Orbán plays on this damaged collective psyche very well. Since coming back to power in 2010 as a full-fledged populist (NOT a conservative, please forget that already), he worked very hard to re-implant the feeling that resistance is futile, protest and criticism never, ever works – not even a deputy janitor talks to protesters, no matter how many there are.

Non-Orbán voters have lost hope and spend their time and mouthpower bashing the opposition, and explaining how nothing can be done. They tell that endlessly to anyone who cares to listen. Most likely to themselves. This is a symptom of helplessness and not of mental health.

Others were bashing Orbán, but refused to touch the dirty mud that was politics. Some because they were precious and ideologically pure snowflakes, who only ever agree with themselves on nuances of ideology and opinion. They all dreamed of their own little party.

Others were so frightened about politics – like teachers and healthcare workers – and so dependent on the state, that they put a huge emphasis on how they are not doing politics. They just… But politics was doing them, it was suffocating them, so they shyly went to the streets. And achieved nothing.

Others still were rightly afraid that entering politics is just a way to get character-murdered and tax audited out of existence. And believe that nothing can be achieved under this election law. And even if they won, they couldn’t govern anyway, because Fidesz made sure that only a 2/3 supermajority can pass a new law, and every “independent” institution is run by a client of Orbán – preferably for another decade.

Disillusioned voters crowed at the appearance of every new political movement, seeing only another shard in the disappointing kaleidoscope of non-Orbán forces and cried that the only organised non-Fidesz power was Jobbik, that is supposedly still worse and more extreme right than Orbán.

There was a lot of crowing, plenty of well-argued helplessness, highly complex, intellectual, and noble excuses as to why nothing can be done. Exit looked easier than voice.

And then a bunch of very young people came to the stage. With a very strong determination to enter politics and get organized. And they had the extraordinary luck to get a referendum question approved (not as obvious as you think), and delivered a kick in the soft tissue of Orbán. It pissed him off and disoriented him. He is now desperate to take back the agenda – and with his attack on CEU, he might have hurt himself.

The reason these young people could achieve anything: they were young and not yet dependent.

The dependence of welfare and clientelism are not friends of freedom. Those who depend learn to love the hand that feeds them – even if it also beats them.

This is also why solid private property rights are necessary for freedom to persist.

And the way property and business has been handled in Hungary in the last few years was debilitating for the cause of freedom: no one had a background from where to go out and protest. It’s one thing to forego future business opportunities just because you get blacklisted. If you have some financial security, you can turn to activism and spend a few years raising your voice and trying to improve things.

But you don’t have to be a rich magnate to finance opposition movements in the hope of political change. You have to have a place to stay and food to eat even to be able to protest on the streets. And if your protesting can cost you your job and not being able to pay rent – you think twice. 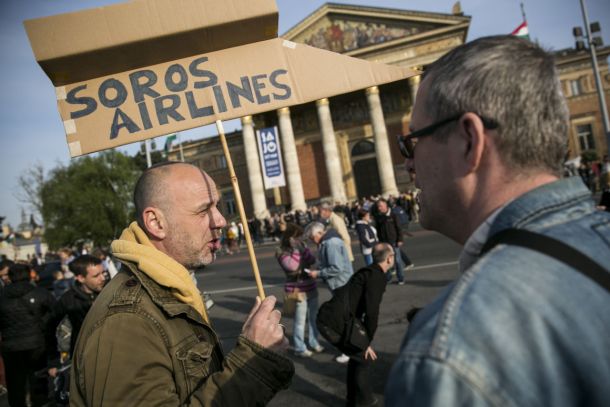 The government media was quick to accuse the tens of thousands of protesters of being Soros’ army – their airfare from abroad paid for by Soros himself. Photo: 444.hu

“How do you still have money? We made sure you starve”

This is why it’s so extraordinarily blood-boiling when governments accuse foreign forces (spelled “Soros”) when someone dares to resist. Because they know perfectly well that they made everyone dependent on power – as clients or as peasants with livelihoods to lose.

When the powerful asks “Where did you get the money to protest?” it is the darkest signal for freedom.

Accusations in the state media that protesters against the internet tax, Lex CEU or the NGO laws are “flown in by Soros” are amusing. But if you know that the Hungarian government has already won the right to distribute EU and Norwegian funds to its own “civil society” – the one that’s supposed to make them accountable – you should get an idea of the shape of civil society on Hungary.

When they start listing and shaming and harassing people who get any money from “foreign sources”, when they call them terrorists – they already know that there is no other way to have a financial background to even organize a popular protest.

Sure, there can be crowdfunded things. The satire party and Momentum are both trying to milk the same few people who still dare to send money – and get on the list of those who send money – for sanity-campaigns.

What happens next depends on outside factors

Orbán can pretend that the protests never happened. Unless he miscalculated himself and the Orbán-Trump dream team is not going to happen. This region has been shattered over and over again by history, for being on the edge of two tectonic plates: the Russian and the non-Russian. Whatever happens in the Russia vs. civilization game will have the last word about Hungary.

As of the domestic factors – things can turn in two directions:

1) One is retreat by government.

What makes it likely is that Orbán has a lot to lose in the world.

Trump doesn’t seem to be his new blood-brother. He is more interested in showing off with North Korea than building bilateral love-alliances with populist soul mates. And Putin may have pushed Orbán to attack CEU but he won’t help him withstand the pressure, especially if Orbán’s party loses its position in EPP and thus its European influence.

What makes retreat unlikely is all domestic:

Firstly, the fact that it would be the second loss of face within a few weeks, right when the party is gearing up to elections next year, having already promised the dirtiest campaign ever. And loss of face is not just a loss of a few voters in autocracies. It may be political life and death.

If resistance proves to be working, apathy is broken, people learn that other people are also disappointed – and the whole building of corruption and intimidation may come down in a quick escalation of events. Orbán had seen it with the Soviet Union once. He actively worked on it.

But the most important factor in not being able to retreat is still Orbán’s personality.

2) Orbán can decide to escape ahead and escalate events.

Firstly, those protesters may be young and not dependent – but they have families.

Families serve as the great pacifier of oppressed folks. You may be willing to stand up against creeping dictatorship, but your family may not. You may have nothing to lose, but some family member may have a job to hold onto. You may be a high school graduate joyfully chanting “Europe! Europe!” on the streets – until one day your father is asked into his boss’ office and is shown your photo. Just that. Nothing more.

No threats are necessary. Definitely no written, countersigned and notarized ultimatums that “you will lose your job and I make sure you don’t get employed anywhere else if your child…” And it doesn’t even have to be a centrally issued order by the Party.

Bosses all over the world are capable of doing the mental math themselves. Either out of fear for the company or out of hope for public contracts – it looks appealing to comply. Your rational, long-term cost-benefit calculation (but if you don’t resist, your whole country goes down) is irrelevant as long as that particular boss makes the decision to hire or fire people based on political opinions.

Apart from informally harassing protesters – which had already started – they can also be shown force. Some were followed home, others were visited by plain clothed don’t-know-who-s. A couple was dragged from their home, she was dragged from the shower, because they protested.

The mysterious, unidentified bald guys have appeared on multiple occasions during the last few weeks, either as masked protesters, or as voluntary helpers of the police, or just to make the protests look violent in the state media. It would be a dark, but logical next step to engage the continued assistance of these mysterious volunteers in the intimidation of youth and their relatives.

People on the streets are predominantly young, under-25. Some argue that the next generation may be lost to Fidesz – just as the current opposition has lost a generation to the nationalists (pardon, “conservatism”). But that doesn’t win the 2018 elections.

That being said, Hungary’s fate does not depend on people on the streets. As always in this region, powers bigger than us will eventually influence our fate. Nothing personal, it’s not a world conspiracy. It is called world.

* The main reason is that the Orbán-government only ever comes up with a policy for one of two reasons: They are conceived because they are 1) excellent corruption opportunity (see Olympics), or 2) because they need a communication edge (distraction, framing, or a simple flash bomb). Manipulating the mood and perceptions is as important for modern-day autocrats as manipulating reality. Even perhaps more so, because perceptions are easier to manipulate. Reality is stubborn. Not that it stops them from trying.