The young lady in white is standing under the bus shelter, with her back to the street, her back to the world – and the whole wide universe of characters inhabiting this city. Around her a non-representative sample of the latter live out their lives like they just don’t care.

A homeless person occupies the bench under the roof of the shelter, nursing his bruised and blistered legs, all the while ranting about a grand conspiracy with George Soros somehow in it. 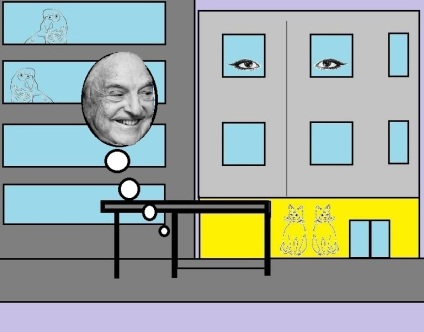 A biker rides by, and attempts to pull off the major stunt of hitting the mouth of the trashbin attached to the bus stop signpost with his emptied plastic bottle of isotonic drink, for no points to score – inevitably misses, but doesn’t bother to draw to a halt and make amends.

I keep watching the young lady from the other side.

A four-wheel pickup truck approaches main street from the side street nearby. It abides by the STOP sign, signals its intention to turn, and patiently waits for the right moment. Rule-conforming behaviour in a jungle of predatory opportunism.

Everything is pretty much orderly about the vehicle, save for the passenger by the driver, wearing adaptive UV-blocking sunglasses, the kind used by special forces. The truck drives past, through my field of vision, past the bus stop where the young lady is standing. I stare in disbelief at the two figures sitting in its bed. One of them has an assault rifle, hand holding foregrip in a casual way, the weapon resting on its butt. The other is posing with a grenade-launcher, full with a rocket-propelled grenade in the tube.

They must be headed to the shooting – of that new Special Squad movie, a fifth episode. Co-sponsored with a generous donation of taxpayer money by you-know-whom, for the purported purpose of city marketing. Several streets in the area will be closed down all day. I heard this in the news – something must always be going down in this city.

„Something must always be going down in this city,” echoes my thoughts the man standing next to me. He materialises out of thin air. Perhaps he wants a conversation. Long time no chat.

I don’t respond. I’m watching the little girl on one of the third-floor balconies across the street. She is waiving to the toy soldiers in the back of the pickup. I peek to the left, and I see the rocket-propelled warrior raising his hand in response even as they are speeding away. The excitement of this sends the little girl running into the apartment, past a voile curtain gently flitting aside to let her in.

„It’s going to rain. She is going to be alright though, under the shelter,” says my conversation partner to a speechless me. I’m beginning to feel uncomfortable about my speechlessness. The man has his own story to tell. I can feel it, somehow. He deserves attention.

„Yes. I guess I’m happy about that,” I reply curtly, and I’m already sorry my reply is so curt.

„That’s my life’s work there. My company built the bus shelter. It’s written there… See? The company’s name is my name.” He seems enthusiastic about telling me this. „I was eighteen when I tried my luck in the advertising industry. I wasn’t twenty-eight before I had my big breakthrough. Way back then… Back in the 1960s. We built shelters like this for my hometown in France. The municipality couldn’t put up the money for this. We did it to create a whole new medium for advertisements. It was good investment, and the people felt grateful for it. My hometown has an agreeable climate, but the annual rainfall may still exceed 300 millimetres.”

„Here it totals over five-hundred… The amount of rainfall,” I mumble.

It’s the first time I turn directly towards him, facing him – to see a weathered face, and I mean this without irony.

He gives me a smile.

„She is going to be alright. I’m not sure if this may be consolation for you, but I fancy telling you about this anyway. That shelter over there is special to me. That is the first that got built after my death. The first in the world. We are present in about seventy-five countries. Yet this is the one, the one that got built first. I like to hang around here. When I’m thinking of my legacy, I see this shelter in front of me. There you are. A world of globalisation – one ends up growing a strong attachment to unlikely places. Now I can’t set myself free from here. I’m addicted to seeing how this shelter adds to people’s lives. It’s like I’m waiting for it to do a miracle somehow. Something of significance beyond this world. Then, perhaps then, I might just leave it behind.”

I am nodding to say I understand. „As a meteorologist, I can certainly appreciate the presence of that shelter,” I hear myself explaining myself. „It is the backup I never used to need. I was proud of not getting a single forecast wrong, working for this small radio channel that she, of all people, listens to every morning. My most avid listener over the last year. Now, in this afterlife, I find myself inexplicably glued to her company… just like you, sir, ended up attached to this shelter, if you don’t mind my jumping to the conclusion… She seems like a nice person, and, to be honest, I don’t quite understand why she is listening to my former channel. It’s crap, really. Pure and simple. It is sponsored by a fake civil society organisation that is funded in turn by a state-owned enterprise, a public firm that is subsidised directly from the government budget. With the kind of news coverage you might expect… In a sea of propaganda the weather section was the island of fact-telling, free of editorial spin. My little island. I was awarded the title of most reliable weather person three years in a row. But yesterday I made the mistake of promising bright weather when in fact it is obviously going to rain now. A first major blunder from my part – and also the last. It must have been that sudden sense of the apocalypse setting in that I tried desperately to counteract, looking to sound optimistic… I guess your shelter puts this in a different perspective. My legacy is that she got to this point always knowing what to expect. I did my part, I did what I had to do all this time, and now things will arrange themselves. My job will be taken over by the programme director’s dumb nephew, Sándor, who always wanted it. He will not handle it particularly well, of course, and the weather section will no longer work to sell the rest of the so-called news my channel is putting out. As to her, this small mistake of mine will remind her of me and the significance of my passing away – otherwise she might not have thought of me at all today.”

A sudden wave of relief hits me as I say this.

The buildings around us start to fade. So does everything else, including us. Our image remains imprinted in the traces we left, in all that’s going down in this city, all that envelopes its current inhabitants, their memories and their prospects, expectations (and forecasts) proven right or wrong…

The young lady in white turns around now.

Her boyfriend, Sándor, is on her mind. He always told her that he is the one doing the hard work behind the weather forecasts. She finds it easy to forgive him for today’s slightly mistaken report – it’s just a stupid weather report after all, it doesn’t matter much. Sándor told her just this morning that he stands to be promoted. Small wonder he had less time to make sure the forecast would be accurate today. He must have had enough on his hands. He is a decent guy, and, once married, they should be able to decently get by.

Her family can also help out from time to time. Her brother is working (white collar) for a company that is set to win a major contract to install new bus shelters throughout the inner districts, replacing the old ones (it will manage the subcontractors overseeing the sub-subcontractors doing the actual work).

In the meantime, she has her own job as the administrator of youth & culture programmes at City Marketing Public Utility Company. It is a peaceful job – and one that she might leave behind without major regrets, be it temporarily or for good, should life turn out so… Because now that the basics are there, it’s time perhaps to think of having children.