“Officially, the state secretary is not currently on a holiday. Could you please confirm if your presence here is work-related?”

The journalist from the online news portal MediaMonster persisted in trying to get an answer.

She hated society’s hypocrisy, already back when she was a high school student.

She tried to rebel against it, in ways she considered appropriate expression of her internal condition, wearing rebel clothing, rebel make-up. That didn’t help deflect the stares, though.

She hated the stares she got from older men. The stares of men of all kinds – even men in their fifties would just sit or stand there, unashamedly gaping at her. She had to endure this from the age of fourteen, ever since her breasts grew.

She hated older women too, those jealous bitches who pretended this was all her fault, and told their husbands that these days young women dressed like whores.

When she looked the unsolicited male observers back in the eye, some of them turned their heads the other away, and that just made her hate them all the more for their cowardice. She felt an urge to go after them, rip off their faces, and smash their skulls in with her steel-toe boots. It was better not get carried away, though. Some wouldn’t look away, and some would turn back after a few seconds to face her. They stared at her with the expression of a pervert, coming closer, whispering dirty words, trying to touch her so she would have to get off the bus or cross the street, pretend to take a phone call or start conversations with random people of her age. She hated these psychopaths for the abominations they were.

Somewhere along the way all this hatred spilled over to others too.

She was a star, she kind of felt that, rising, shining bright, but without a proper audience, as yet. She was all colour – the people around her were different shades of gray. Going to work in their stupid jobs every morning, looking like they were really into it, whatever it was that they were doing for someone else’s profit. Obedient dogs, loyal to the System that churns out slave-men who only pretend (pretend to themselves) to hunger for sex, mouths drooling, looking at young women as objects of desire, in reality just looking for someone who wouldn’t fight back, who can be humiliated, to feel un-humiliated themselves.

The women were just as horrible. Looking, scheming, manipulating to keep these men. What role models to follow.

But it wasn’t just older people. The other kids at high school, some of them were equally pathetic too.

The hater-girls, for example, who had tattoos here and piercings there, but would never catch the looks quite like Dóra did…

The eager beavers who studied hard to conform to the System’s expectations, memorising evertything down to the last needless detail, memorising vanities such as the stupid history of this stupid country – the history of the idiots who have been here before, and done historical shit. (Who cares what year one of these retards rode out of his castle to face certain death at the hand of enemy retards?)

She hated the smart assholes too, the ones she made out with in their parents’ places, the ones who would go on to own the world later in life. She hated them because they never really saw the human being in her, never really valued her for who she was, just for what she was (and hoped to insert the right genital there).

Eventually she found her group of coolboys she could bond with. Badass, not too smart but funny, definitely cooler than the others around them, with good enough looks. They got into their little adventures over the course of the last two years of high school. Stole some things from small shops, sold hash to drunken British stags around Gozsdu udvar, played pranks on people. Once she got into a fight with a stupid bitch who photobombed her selfie shot at a house party. She beat the wannabe diva unconscious, and felt liberation. This was her graduation as a woman who wanted be seen as a woman.

The years at university were an unexpected boost to her life. She thought the System would be really out to get her this time, that it would be her turn to give in, to begin to work hard for nothing. Instead, she got to know more coolboys, some coolgirls too. Her parents supported her, so she had the money to enjoy parties, binge drinking and the occasional sex accident, to keep her mojo in shape, from Thursdays to Saturdays. Sleeping through stupid lectures during the week where boring lecturers spoke about hopelessly uninteresting subjects that never really addressed anything real in life. What did these people know about life, anyway? Seriously? Lecturing at a university? They obviously had nothing to do with it.

She got along, though, as everyone else did, with the help of second-hand notes, pretty make-up at oral exams, aggressive counterattacks at exhausted-looking profs who would have dared to fail her. She felt the power – the empowerment – that she felt back when she beat up that stupid bitch at the house party. She was gaming the System audaciously, and winning. She collected her diploma eventually.

Her appearance changed somewhat in the meantime. Gone was the rebel clothing of the high school years. She figured that wearing the perfect make-up and being fashionable, shining brightly as only she could, would be the best way to beat the System. Men are giving you looks? Let them feel how insignificant they are. Women are jealous of your looks? Let them feel they have no chance – and let them feel what ridiculous losers they are if they even try to compare you to a whore.

She still considered herself a rebel – real rebels can walk over obstacles if they have to, she was growing in confidence.

She got to know Árpád during her graduation year.

Her own confidence may have been growing – Árpád’s confidence had no limits. There was something intoxicating about this. The way he knew the right people, was in on the secret meaning of all that was happening in the country, and spoke the talk of power as an insider. How he ridiculed norms, and with the norms all that hypocrisy that always surrounded her, that she hated so much.

With Árpád, walking over obstacles was the norm.

Upon graduation, she thought she would have to get a job somewhere, somehow, and the System would now, finally, get her in turn. But Árpád didn’t mind if she worked or not. He was offering her an easy life. Moved by the generosity, she was ready to make some compromises. She saw a gynecologist to make sure she could have children – it turned out she couldn’t. She would have felt relief, had she not had to worry about this being the end of her relationship with Árpád. Better brave than sorry, she told Árpád about this straightaway. To her surprise, Árpád didn’t look particularly troubled, consoled her, and two weeks later had her engaged.

A year later Árpád became state secretary in a government ministry (he did know the right people after all), and they were now looking ahead to a really good life, it seemed.

Then came the scandals.

Anonymous leakers informed the press about corruption at the ministry. They also alleged that Árpád was having an affair with his 19-year-old personal assistant. Dóra knew that one allegation could only be as true as the other. Naturally, that meant they were lies concocted by Árpád’s enemies.

She found all the media negativity abhorring. Árpád was obviously working very hard, putting in late hours quite often. Those same people who were envying her, judging her, harassing her, talking behind her back, and scheming to bring her down, were back. The System was really trying to get her this time, it was trying to get her together with Árpád, with blatant disregard for the sanctity of privacy.

She fought back viciously.

„You! Your whore of a mother! Leave us alone! This is our private space! Get out of here!”

The people around them were looking at them. She was screaming, venting all her anger at the journalist from MediaMonster. She felt an urge to go after the intruder, rip his face off, even smash his skull in with steel-toe boots – or, no longer wearing steel-toe boots, to maybe poke his eye out with her stiletto shoes.

Instead, she flung her glass of champagne at this paparazzo of a journalist.

She was a rebel, not a monster after all.

Also, this was a more appropriate response in the exquisite setting of the Sunset Riviera Deluxe Elite Night Club, on the Spanish Mediterranean island of Formentera, next to Ibiza, a gathering place of insurgents of this world, exceptional people like Árpád and her, working hard, harassed by the System and its annoying, hopeless slaves.

With Árpád and all these other important and beautiful people around them, they were just hoping to get away from it all for a little while, but of course someone was, even here, bound to be at their heels – in her case, at her eight-inch stiletto heels. 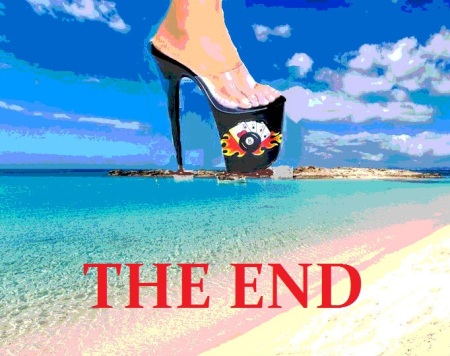 This short fiction is the work of our guest author, Mr Peter Primer.