In the wake of recent magnificent sports events the whole nation is abuzz with a new life lesson: That national sport success is exactly like real success of one’s own. 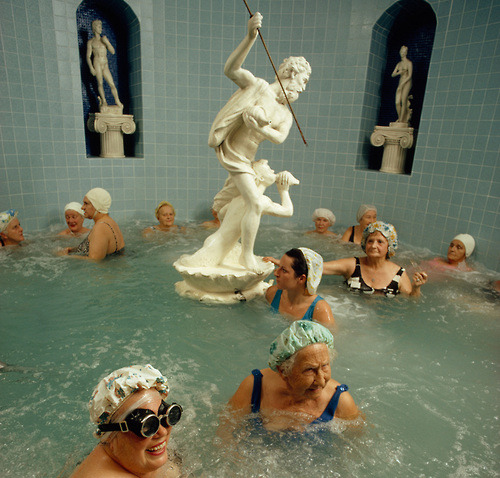 “I used to think success is when my life gets better but I know better now” said Mr Mézga (45). “It can be someone else’s.”

“Success can come in the shape of me having to forego meals because my taxes went to build stadiums,” added Mrs Mézga (42) militantly. “First, I thought it was outrageous. But then I heard the anthem when what’s-his-name won the bronze medal and now I understand. Plus, I got slimmer.”

“I found it wonderful that I can be part of a success without moving a finger” said Ms Ursula (39, nurse) and took a huge bite of her doughnut. “Sport is marvelous,” she added with a full mouth.

“At first I was ashamed for feeling so proud. After all, I haven’t done any sports since school. But then I was told about collective success and that athletes were financed by my taxes – and I knew I had a share in this” said another patron of the confectionery before asking the shopkeeper to unpack one of his Somlói sponge cakes because he hasn’t got enough money to buy two. “You see, spectator sport is great business. It just makes sense that the budget should invest in it.”

Another citizen agreed: “It is a bit counter-intuitive, but success can indeed come in your life in the shape of cheaper meals at the end of the month and less education to your kids because you can’t afford it.”

“I also used to be misguided,” said the waiter wiping a table. “I used to think I need my own success. To be left alone and to have the freedom to start my own business and pay my taxes. To have my own, personal success with hard work and ingenuity. But I’ve learned that it was selfish. I have to do whatever helps my nation instead. And that is lowering my expectations and wait tables,” he said before he murmured something about losing his business due to excessive taxes, byzantine bureaucracy and random fines.

“You have to make sacrifices for such great success,” agreed the owner of the shop. “And success doesn’t come without expensive stadiums, everyone knows that,” he added, nervously looking around. “I just wish we could give enough money to our football players to improve their game.”

Mr Vuk Kis (3) said “I heard that the amount spent on FINA world championship could have financed the purchase of two sets of new metro carriages. But come on, what do you remember from the London Olympics – the underground or the games?”

“And despite all the bad things under Hitler, the Berlin Olympics was a success. Do you remember Jessie Owens or the Berlin Subway?” asked Mr Hufnágel (53), who was more belligerent. “Sport is like a war and our nation must not be beaten in a war – or the enemy tribe will rape our women. It’s a matter of life and death.”