Metro-Goldwyn-Mayer made a sightseeing video of Budapest in 1938, just weeks before World War Two broke out, and it’s in full color. If you visited Budapest recently, you will love this historic time travel.

It starts with the most irrelevant factoid about Budapest (it consists of Buda and Pest) but then it goes on to explain Hungary’s early 20th century history – up to the advent of Word War Two that hasn’t started yet at the time of the video. In fact, it was just about to break out so this is the last summer before the most shameful destruction of recent history that our much admired strongmen have brought upon us.

Observe the WW1 grievances explained from 1:20.

Liberty Square in 1921 on a postcard. The flower arrangement reads: “I believe in one God, in one homeland, I believe in one, eternal truth of God. I believe in the resurrection of Hungary” Still often chanted by nationalist in Hungary.

The landscaping work on Liberty Square is a reminder of the Trianon Treaty (part of the Versailles Treaty ending the first World War) and Hungary’s consequent territorial claims that chased the country into WW2 on the German side – in the hope to get those territories.

All this seemed important enough at the time to tell in an 8-minute sightseeing video for American audiences.

In a twist of historic irony, that’s the spot where the WW2 Soviet War Memorial stands today (the monument you’re looking at when you take that selfie with the Reagan statue). Actually, it is not a coincidence. The Soviets knew how to humiliate their colonies and hurt their nationalist feelings so they chose to erect the monument right where it hurt the most.

Sadly, because of communist oppression of nationalist sentiment, nationalism was considered something like a birthright that was taken away from us in 1945, but we needed it back now that communism ended.

Soviet War Memorial today (the Reagan statue is behind it) Photo: budapest-foto.hu

The Soviet monument is grossly out of place on a major square of Budapest today, with its communist star and claiming to have “liberated” Hungary after WW2 – when in fact, it was the beginning of the 45-year Soviet occupation. But its removal would be unforgivable in the eyes of Russia that has imperial ambitions today that are on par with those of the Soviet Union in 1945. * 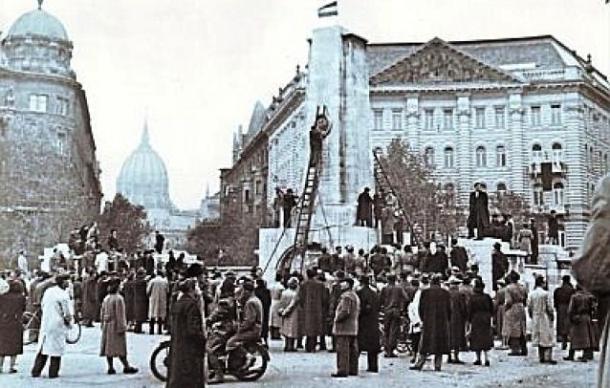 People try to demolish the offensive monument during the revolution against Soviet occupation in 1956 Photo: budapest-foto.hu

Two more fun facts from this short video: Austria-Hungary used left-hand driving until 1941 (when the Germans switched many countries to right-hand traffic), and the Chain Bridge (built in 1849) used to be a problem for steam boats because its clearance was insufficiently tall for their chimneys. The solution: reclining smokestacks – caught on camera (at 3:10).

View of the world’s largest parliament building in 1938

Another section is dedicated to historicism, about St Stephen, the first Christian king of Hungary (969-1038) – whose embalmed right hand they still have on display and walk it around the Basilica every year on August 20.

Turns out, outdoor restaurants and gardens were quite the spectacle for tourists – even back then. So were the thermal springs all over the city and the first wave pool that was designed and built in 1927 in Budapest in the Gellért Baths.

In another archive footage you can admire Budapest with considerable less bridges and more military uniforms than today.

All this was Budapest before the second world war, the battle of Budapest, the expropriations, the infamous “cellar sweepings” (referring to the confiscation of the last grains of food from the population), communist nationalizations, Recsk (the Hungarian Gulag), deportations, the post-war economic destruction, the 1956 revolution, etc. These were still to come.

* It just doesn’t insist on calling it anything in particular, and the weapon of choice is not military occupation but exporting corruption, an unbridled oligarchy under a strongman, and nurturing all sorts of social divisions in western societies to divide and stupefy their electorates. So you are free to deny it and pretend that your social divisions are totally not caused/stoked by the Russian leadership.