Finland may top the PISA charts but their education system produces possessed little monsters – at least if you get your information from Hungarian state controlled media.

The article titled “The Finnish model” has been published spontaneously and simultaneously on every “independent” local news site in Hungary that just happens to be owned by Orbán’s new straw man. 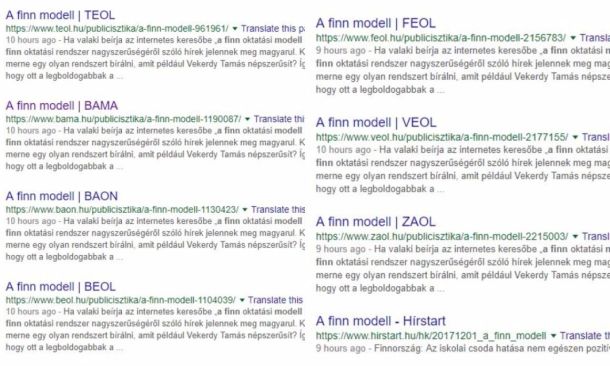 “The Finnish model” – the article featured on every local online news site of Hungary that were bought up by Orbán’s top oligarch last year Image: 444.hu

The entire article is a mere 197 words (!!!) and it contains no tangible claims or references. It expresses an unveiled sour grape attitude towards the Finnish education system. Ironically the angry columnist accuses the Finnish system with promoting mediocrity and holding back talented students – a remarkable feature of the Hungarian educational system that I had the misfortune to experience first hand. And he misses the critique of the Finnish educational system from his Google results – a proof that we are being brainwashed!

So far nothing surprising. State media smearing other country’s success in order to make Hungarians feel good about whatever shitty education their children are getting.

And then, after just 70 words, the article takes a bloody turn…

“In the meantime, the murder rate has soared, suicide is a severe problem and alcoholism is rampant among the generation getting out of this education system.

But Finnish children are supposedly very happy. To express it they burn churches and cathedrals, sometimes they provoke bloody street riots, and in certain schools they organize murderous shootings of their classmates with their parents’ guns.”

You see, at least Hungarian kids are not murderers. And they don’t burn down pretty cathedrals to heat up their cocaine on the flames before shooting up into their eyeballs or something.

It is hard not to see petty revenge behind the Fidesz media’s ire against Finland. PISA tests came back – once again – with shameful results for Hungary. The decline in the quality of education seems unstoppable and it is an obvious result of a willful policy of dumbing down and de-educating youth…

…but with more sports, physical education, nativist historicism and – most recently – shooting ranges for every district. One day, Hungarian kids might have to defend themselves against Finnish children on a murderous rampage…