Hungarian healthcare is free and universal. It is also killing patients and practically enslaves nurses who are stupid enough not to emigrate. But it’s free, that’s what matters. 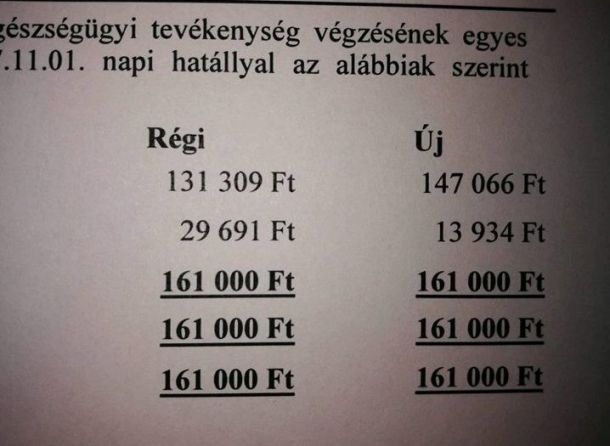 Pay slip of a nurse with old (left) and new (right) take-home salary after 12% pay rise to his basic wage. The total is the same: the minimal wage Photo: 444.hu

The victims of free healthcare have to bribe doctors and nurses to even get attention. The unofficial bribes have printed price lists, with set amounts for everything from attending birth to getting considered for cancer treatment. An average visit to the emergency room lasts more than 12 hours – in waiting, not in treatment. But it’s free, that’s what matters.

Healthcare workers and their families would starve to death without the “gratitude money” – as they call bribes in healthcare. They are among the most underpaid employees (and there’s a steep competition). A nurse makes 550 euros a month (see above) while renting a 40 sqm flat costs more than that, without utility bills. When these overpaid bastards complained (they are not allowed to go on strike) the responsible minister cried fake news. At an immortal press conference a journalist then informed said minister about the legally set wages for nurses – and the minister was visibly taken aback. All he could mutter with his sexy lips was “Don’t they have husbands?” It didn’t go down well.

But how things go down rarely matters in an autocracy. Or it matters, but in the opposite way than what you are used to in the first world. In an autocracy, if people are outraged, the leader gives them more of the same, thereby eroding their resistance. If they strike or protest the leader demonstrates that nothing will change. And when they helplessly give up, the leader sends in the good cop and destroys the last of their fighting spirit by generously throwing them a few peanuts or making symbolic gestures. (Usually, the peanuts land at a crony’s pocket, to pile insult upon injury, but by that time no one has the spirit to protest.)

As protests about healthcare workers’ wages died out (and the nurse leading the protests lost her job and gave up on humanity) our good cop daddy stepped in and promised a wage-consolidation. 12% no less!

12% of 550 euros is still not enough to live on but when you have already shrunk your living expenses to that point, you are practically frozen in helplessness, and the extra money feels like a gift – especially before Christmas. It’s the price of a Christmas tree – not that you will have one. You can still not afford it after the wage rise, not if you also want to pay your outstanding bills and keep the Christmas lights (and the heating) on.

But then reality slapped poor nurses in the face. Because the much-anticipated 12% applies to their actual, legally set wages. And those wages have already been adjusted upwards to meet the minimal living wage in their profession, the 550 euros. So after the wage rise, they still get the same. Merry Christmas!

Meanwhile, from the same budget that healthcare is financed from, the government has built a few dozen overpriced and oversized stadiums, can’t stop hosting corrupt sports events (to bring imaginary prestige and equally imaginary tourism to the country), desperately wants to host the Olympics (even if we all break) and takes out tens of billions in Chinese and Russian loans to have Chinese and Russian companies build infrastructure in Hungary that only China and Russia need, if at all.