Publicly scolding the head of the election committee and accusing the courts of interfering in the elections show that Orbán had dropped the pretense that he regraded any institution independent in this country.

Just recently have I come across an old article about Orbán’s 2002 election defeat. According to people close to him (who used to talk to the press back then, even if anonymously) he was so concerned that he would come across as an autocrat that he appeared weak on the TV debate and consequently lost the elections. How times had changed! Firstly, he doesn’t give interviews anymore and never participates in TV debates. But more strikingly he is not concerned about being an autocrat anymore. Quite the contrary…

The godfather jovially threatens his subordinate

The day after the elections, triumphant Orbán couldn’t resist posting a video on Facebook. The footage comes from before the elections and shows Orbán scolding the head of the National Election Committee for fining him for political pedophilia. (Just like many douche bags in his party, Orbán visited a kindergarten and used the kids as props for a campaign video. The nurse didn’t dare to resist and parents were not notified, as usual. Nor would they dare to complain.)

The election committee issued a few symbolic fines on Fidesz and its arms before the elections such as a few thousand euros to the public broadcaster for never letting opposition politicians to appear on TV. Orbán also received a symbolic fine (1000 euros) for the kindergarten scene. (They have failed to punish Fidesz for things like campaigning on billions of taxpayers’ money though.)

The reason the committee was suddenly so “bold” is that a few new, temporary members have made it into its ranks once new parties were qualified for running at the elections – on top of the permanent members who are appointed by the Fidesz-majority parliament. The committee is supposedly independent – but as you have probably noticed by now, nothing really is independent from Orbán in Hungary. This committee, for instance, is headed by András Patyi, who is so shockingly independent, that he is also head of at least five other institutions that are anything but independent.

Such as being the rector of the National Public Service University, the pet university of the government where dead-end careers are created, training innocent youth to become public servants. Patyi is the guy wearing the ridiculous ceremonial necklace (because medieval-looking traditions are important even at a 5-year-old institution).

Orbán visited the university during the campaign, to lay eyes on the recently finished campus. From left to right we can see Orbán, Patyi (in the pompous uniform), and István Tarlós, the mayor of Budapest.

This video was posted after the election, making no point whatsoever, apart from scolding Patyi and showing him terrified. It is a gesture that cannot be seen anything else but a demonstration of power and a threat for other subordinates. Orbán is supposedly cracking a hilarious joke – in a manner a godfather would jovially scold a subordinate before he is taken to a construction site and shot into wet concrete.

The entire video consists of three such scenes – each showing Orbán scolding Patyi for the mini-fine.

The message is clear. The law is for poor people, not for the king. And Patyi had failed to exempt Orbán from consequences. The 1000 euros didn’t make a difference, it might actually have been the only campaign spending of Fidesz (the rest was on the taxpayer), but not even such a tiny transgression will remain forgotten.

Patyi – and every other stooge put into his seat to do Orbán’s bidding without being asked – should know that Orbán doesn’t forget. Next time he may crack jovial jokes at you…

Accusing the supreme court of interfering in the elections

The judiciary is the last semi-independent institution in Hungary. Orbán has lost his supermajority a year after the 2014 elections when a by-election produced a surprise defeat for Fidesz. He had to spend the years 2015-18 without his precious supermajority and that stopped him from more changes in the constitution and cracking the neck of the judiciary. That is no longer an issue, thanks to the miraculous, last-minute save of the elections.

Yesterday, his spokesman expressed Orbán’s dismay at the Curia (Hungary’s supreme court) for ordering the nullification of thousands of diaspora votes that were sent back in unofficial or broken envelopes, ordering the recounting in a few districts were glaring mistakes were made, and ruling that organizing bus trips for Ukrainians to Hungary just to vote for Fidesz was not kosher.

Orbán said that the court “hasn’t grown up to its task intellectually”.

Every time the election committee – Patyi – was quick to announce that there’s no reason to worry, it will not change the results, not even worth to recount. The guy must be mortified that he might still fall into a pit of concrete somewhere. Not surprisingly. Patyi also voted against accepting votes in open and unofficial envelopes. So Orbán is only one mandate shy from losing his precious supermajority, the way he did in 2015.

Earlier this year, Orbán also accused E.On, Facebook, Soros, the US, the European Committee, OLAF, student protesters, and the UN of interfering in the elections. I wonder when voters will be accused. Just joking. Vote don’t matter anymore, unless as a show of loyalty to the powerful. 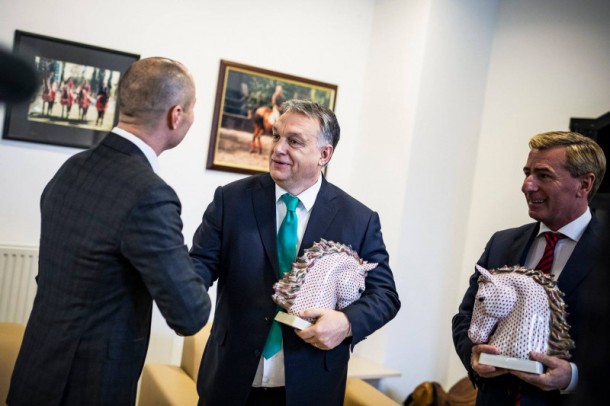 Featured photo: Orbán is gifted a horse head. He is apparently sending them out now…

4 thoughts on “Orbán Can’t Contain Himself”