According to the analysis of portfolio.hu, at least 300 thousand workers are sorely missing from the Hungarian labour market. In the meantime, OECD puts the number of Hungarians abroad at one million.

It has led to a crippling labor shortage by now in every sector, including unskilled workers. Read hair-raising stories here.

According to one reading, the exodus has to do with the Orbán-government (corruption, on-paper economic success, and autocratic politics), and the third election win of Orbán didn’t help either. The government in the meantime is busy spreading the message that emigrants are, in fact, returning in droves. You can see why Orbán would be keen for us to believe that.

Since accurate numbers are hard to come by, we have only estimates about the migration within the EU. The below chart shows the percentage of the workforce (working age population) living abroad, according to Eurostat data. 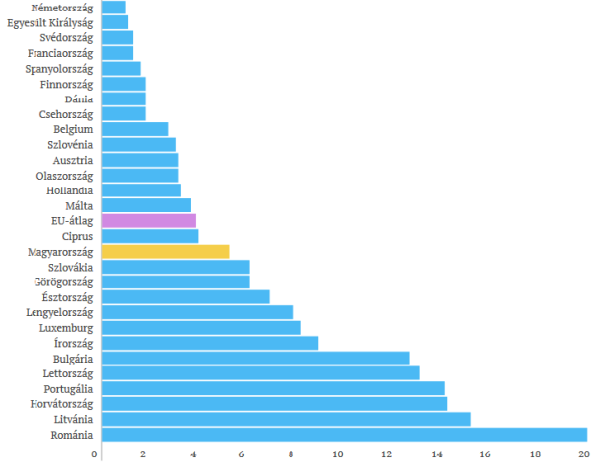 Hungary may be severely affected, but it is still better off than neighboring countries. Croatian government is talking about a state of demographic emergency. Ukraine is emptying out. Lithuania and Romania are leading the official chart of workforce abroad.

Eastern European countries’ ability to retain workforce is evaporating rapidly. Local populations may be mortally frightened by immigration (mostly by their own unscrupulous governments) but they need it desperately.

This should be the most burning issue for Eastern European policymakers, not the non-existent immigration pressure.