I dare you to do business in Hungary...

It took Hungary 15 years to develop a working, competing market of waste management and recycling. Fidesz destroyed it in just five. By 2011, recycling and waste management became a 25 billion forint business in Hungary (with push from the EU) complete with competing companies and decreasing prices. Fidesz nationalized it in 2012, tripled the fees, then let the industry die. The story of how bin collection was taken away from the private sector, nationalized, and then destroyed is a typical Fidesz economic story.

The motivation of the bin centralization was obvious. The minister ranted about companies that managed to do the job for the fraction of the government mandated price, for just 20-25 billion forints per year. He called it unacceptable and demanded to collect 108 billion from the households per year instead.

In a more nuanced press conference his minion presented the bona fide Marxist argument that the price competition between private waste management companies distracts from the real job and that it threatened the fulfillment of EU directives. This is not even a rare moment of market-hostility from Fidesz. This is how they have been since 2010.

At the end, the ministry settled on a 60 billion collection target, like the good central planning comrades they are at heart. They planned to spend 23 billion on the actual job, the rest was earmarked as central budget revenue.

The pressure on waste collection companies was compounded by Orbán’s utility bill populism in the 2014 elections. Back then he ordered utility companies to reduce their prices by 2×10% (and then freeze), effectively rendering them unprofitable. When utility companies went bankrupt, a crony bought them and the hostile legislation was removed. Waste management was also affected.

Then came the Bin Holding. (It’s full name is Nemzeti Hulladékgazdálkodási Koordináló és Vagyonkezelő Zrt.) The government set up a holding company in 2015 to collect the waste collection fees instead of the actual utility providers – and take their cut. Since the Bin Holding has not a single truck or shovel, the work itself was left with the private companies. (Cronies prefer not to be bothered by running the businesses.)

So the Bin Holding collected the increased fees and (surprise) failed to pass it on to the companies doing the actual work, the bin collection.

Companies that managed to avoid bankruptcy were really getting on the ministry’s nerves, so a range of laws were passed to target them in 2017. In a deluxe Marxist move, the companies were ordered to become “non-profit”, by which Orbán means that you are not allowed to make any money – you may even be required to incur losses if his economic populism necessitates. Bin collection companies were also forbidden from their other source of income, buying recyclable waste from the households.

Recycling has de facto stopped in many places (other places it never took off). Building managers in Budapest are spotted asking residents to stop using the selective bins altogether, because nothing gets collected from there. But it gets worse. 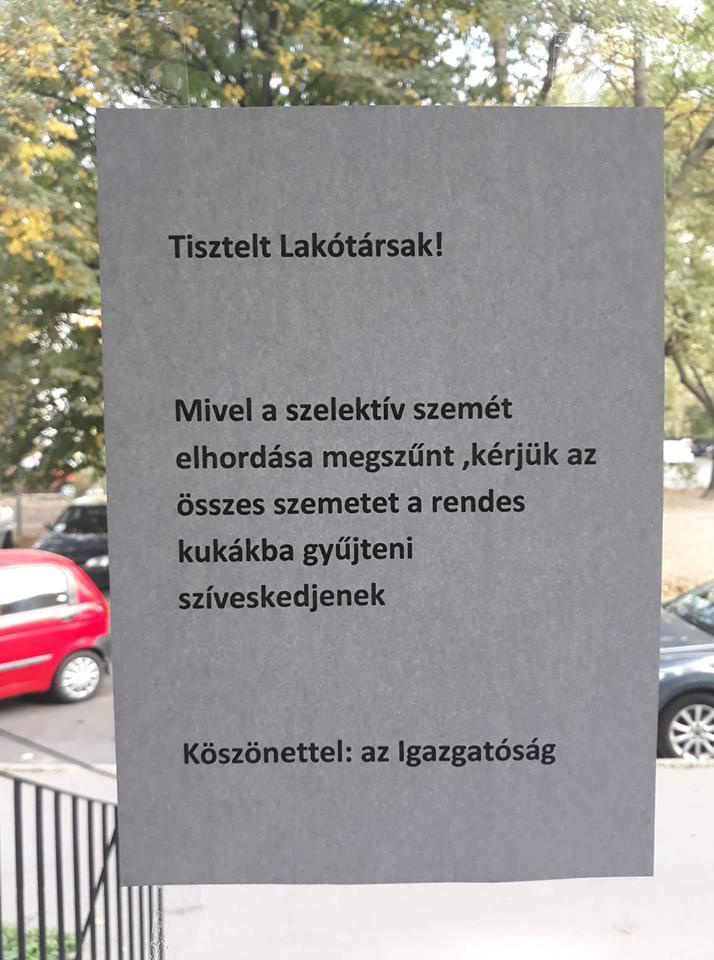 A building manager asks residents to stop using the selective bins because “the collection of recycled trash is over”. Budapest, October 2018

The operative company Zöld Híd has been collecting waste in 116 towns and villages near Budapest, serving 350 roughly thousand people. Ever since the nationalization was passed they received less money than their operating costs. They were 130 million forints short every month. The January bill was only just accepted by Bin Holding, and we are in November.

When they requested a review, the ministry escaped ahead and ordered them to pay even more – rather than correcting their fees. They are now required to pay 122 million back into the Bin Holding. (Probably to teach them a lesson.) The government spokesman blamed “the lobbies” and said that they won’t back down in the face of economic “blackmail”. (I am expecting them to blame Soros any minute.) 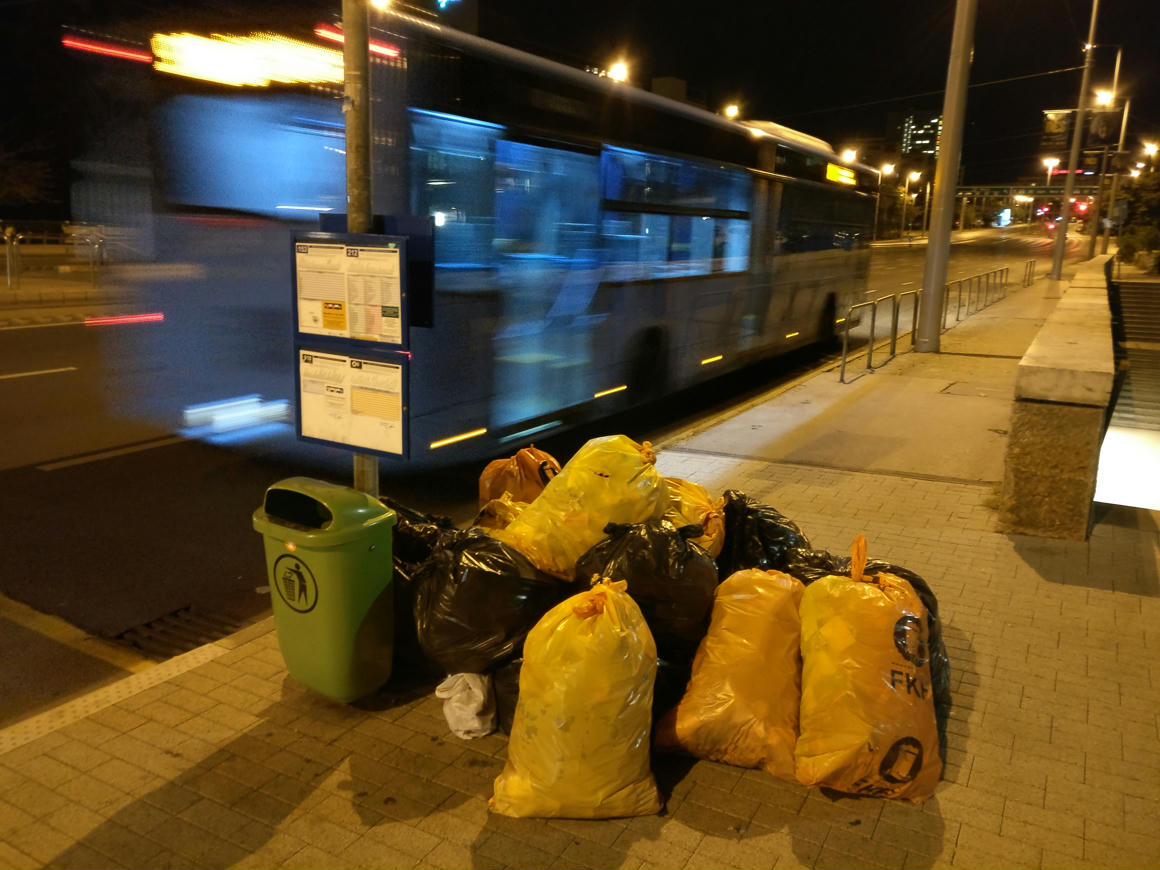 For weeks, images of uncollected trash have flooded the media and social media. Tomorrow, 116 towns and villages will not see their waste collected.

Not only does the Bin Holding fail to pay for collection, they also neglect maintenance, so the vehicle fleets of the operative companies are also out of shape. But economic long-term thinking is not what Fidesz-style clientelism is famous for. Stealing must be effective and fast, for the window of opportunity might close any minute.

The government is desperately trying to make it a losing business to collect waste and recycle – only to squeeze out any market players. The purpose is vague though, probably they don’t know it themselves. Central planning, profit-bashing, private sector hating instincts are strong with the Fidesz comrades. They might just be trying to paw the system and will it to work. With the sheer force of the law.

The “logical” next step would be to legally force the companies to keep collecting trash for free – we are practically there anyway. Fidesz and Orbán himself have expressed repeatedly that the economy can be legislated with legal force. Reality will surely buckle when it meets the majesty of the two-third…