Authorities are notoriously stingy with data as a response to freedom of information requests and there has been a war of numbers all summer about the number of teachers missing from the education system in Hungary. According to (nicely polished) official numbers, the shortage is at least 1300*.

Solution for school overcrowding problem: Mechanical school in your home – Retro Futurism from the 1950s. Also a solution to teacher shortages. Or maybe not.

* If we accept their methodology, which is very self-serving.

Klebelsberg Központ (KK), the central bureau of the centralized education system of Fidesz (aka. master of life and death) has published their official estimate of the number of teachers missing from the education system in the school year 2018/19. The number has been the subject of intense scrutiny all summer, after repeated reports popping up all summer about entire teacher boards standing up and leaving in reaction to extreme centralization and political decisions made above their heads.

Education is also affected by the mass exodus of the population – with an estimated one in nine (working age) Hungarians having left the country since 2011, according to estimates. But the final blow was the extreme centralization, the increased work load for both pupils and teachers (prompting various, lame protests), and issuing surveys to every teacher, asking about their private lives and what Facebook groups they are in. (Latter has been revoked after a few weeks, but many may have felt obliged to answer the questions nonetheless – dragging your feet or unenthusiastic attitude to officialdom risks you losing your job. (And the shortage of teachers won’t save you. Teaching lessons to those who don’t align 110% is always the priority under an authoritarian regime.) 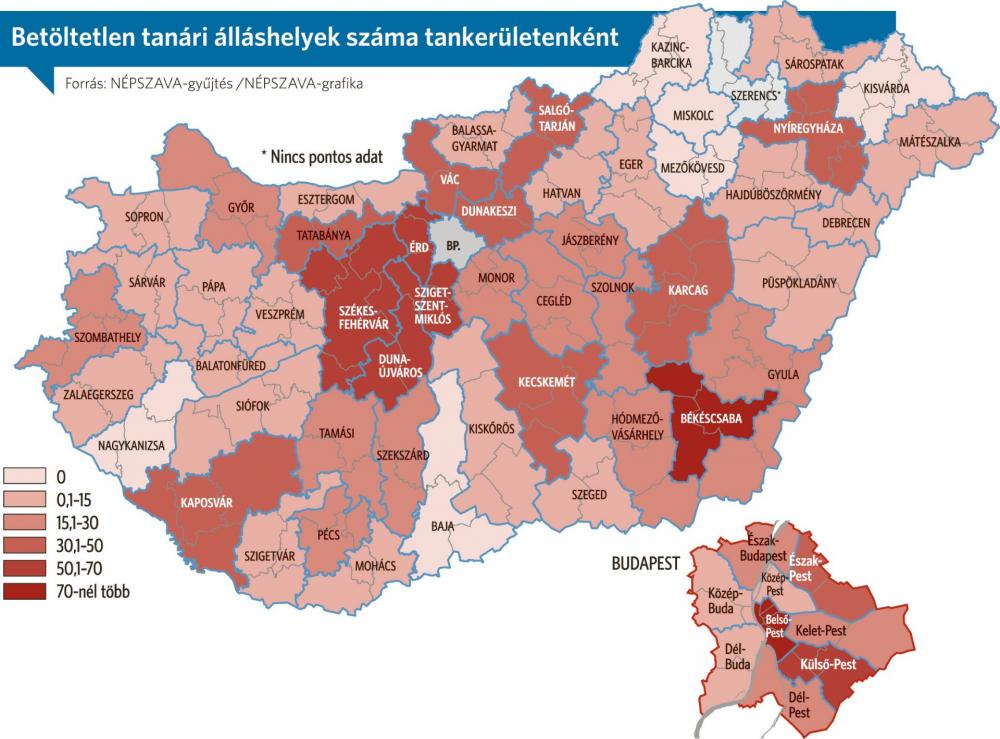 The most heavily affected regions are the darkest. Source

According to official data released by KK, there are 1286.85 teachers missing. The decimal places should give you the first hint that this calculation doesn’t count teachers like you and I would. Teachers’ unions are also contesting the number, claiming it is closer to 28-33% of teacher positions – when it is calculated with normal weekly contact hours and at least semi-qualified teachers are required. That means almost 50 thousand over the current 145 thousand teachers.

The official numbers are bitterly contested by the teachers’ unions, and there’s quite a range between the official 1300 and the unofficial 50000. Index.hu published a report before the school year, concluding that 4325 teachers seem to be missing from state schools – to which the KK reacted that there are at most 3400 unfilled positions. So where did the 1286.85 come from?

According to KK, there is a school district with only 0.16 teachers missing, which doesn’t mean a one-legged gym teacher. It means instead that this is the proportion of classes that couldn’t be covered by anyone – no matter how incompetent – in unpaid overtime. The legally allowed maximum of 32 hours of teaching per week (plus 60 free overtime hours per year) is often fully exploited, even though that allows for little time to actually cover the necessary work. And then come sick days and maternity leaves that have to be covered on top of that. Retired teachers are regularly employed, and the ageing of the teachers will only become more acute.

The age tree of teachers. There are two teachers working between age 96-100. Source: Index.hu

Schools can also try to play with the number of classes held – as opposed to how many would be optimal and covered by KK. If they just cancel or merge classes, and teach the absolute minimum number of classes necessary for the class to eventually graduate, they can cut back on manpower – at the expense of teaching and students. But they are not important. In school districts outside of Budapest, only 70% of the allotted classes are held.

Index.hu counted how many of the allotted classes are held in each district. Poorest regions see only 70% of classes of the optimal.

Perhaps not unrelated that the government allowed the merging of sciences (chemistry, biology and physics) into just one subject, the extra classes will become free for gym or attending the shooting range – another of the great (albeit a tad whimsical) ideas of Our Great Leader.

Another point of massaging the statistics is the qualification of teachers. According to KK’s statistics (and daily practice), a teacher of (Hungarian) literature is allowed to cover for an English teacher (as foreign language) all year long. Or a chemistry class. Definitely the gym – and there are a LOT of gym classes, prescribed by law by Fidesz, since Orbán considers the physical fitness of the Hungarian biomass of utter importance.