Orbán’s regular Friday sermons in the public radio are appalling displays of subservience. There is no need for a reporter, all these rants require is a voice to read the prepared questions to King Orbán. Once an overzealous reporter went off-script in her eagerness to show how much she agrees with Orbán, and she was removed. Not because she asked a challenging question – quite the contrary – but because she went off-script.

But on February 22, they went even deeper and beyond. Here is a real QUESTION to the prime minister of Hungary in the year 2019 – from a “reporter” of the public broadcaster in the show “180 minutes“, aka. Orbán’s weekly rant.

“Jean-Claude Juncker called it a hate campaign earlier this week. But you can’t find anything in it that would incite hatred, on the other hand it is exposing and revealing indeed. Of course it wouldn’t be pleasant 〈for Juncker – ed.〉 to face the fact that the policies of the Brussels leadership didn’t deliver results after five years, and voters didn’t get this impression out of nowhere, but they can see its results themselves.”*

If it doesn’t sound like a question, it is not a mistake of translation.

No, this is not North Korea. Only perhaps in people’s minds.

The question-reader is referring to Orbán’s latest sweeping billboard and advertising campaign that attacks Jean-Claude Juncker and George Soros on a poster with the slogan: “You have the right to know what Brussels is plotting.” 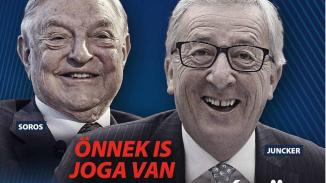 In his “answer”, Orbán explains that “obviously, the European elite has grown unaccustomed to criticism.”

And irony is officially dead.

* Here is the Hungarian transcription if you want to fry your brain. Orbán is always very convincing if you need to believe him or if this is your first day as an adult.