The European People’s Party needed to feign some backbone before the EP-elections in May so they managed to suspend Fidesz a little.

Headlines the next morning. Image: index.hu

So this is what happened:

#Fidesz will be suspended with immediate effect and until further notice following today’s vote of EPP members (190 in favour, 3 against). The suspension entails:
▪No attendance at any party meeting
▪No voting rights
▪No right to propose candidates for posts

And this is how Fidesz-media presented it:

The latter article continues with breathless admiration of the Leader’s toughness and how he cowed the EPP into submission: “They changed one point of the vote last minute … because they have learned that Viktor Orbán already had the signed document to leave EPP with him. So instead of suspending Fidesz’ membership, the EPP finally voted about Fidesz asking for its own suspension.”

“Katalin Novák: According to our experience, there are people in EPP who had completely parted from Christian democratic values.”

And finally, an opinion piece from the same paper appeared entitled: “Fidesz success in Brussels”

Also next to the EPP-news glared this headline – I include this because it was placed like it belonged to the EPP news:

It was a 75-word thing claiming that Merkel practically admitted the failure of “Wilkommenskultur” at the Global Solutions Summit in Berlin. Then it ends like this: “Unfortunately, her illumination took the lives of many innocent victims, from the Berlin Christmas fair, through the countless knife attacks, to the violent Cologne New Year’s Eve. Perhaps it’s not too late to stand behind the Hungarian standpoint.”

Some sites even appeared with the headline: “Fidesz is not suspended” At some point the state TV ran two parallel news headlines, one stating that neither expelled, nor suspended, another that Fidesz suspended itself. The talking head is the constitutional lawyer who had recently been caught on camera rephrasing his professional opinion at the reporter’s request to include the catchphrase that “they said we should use”. 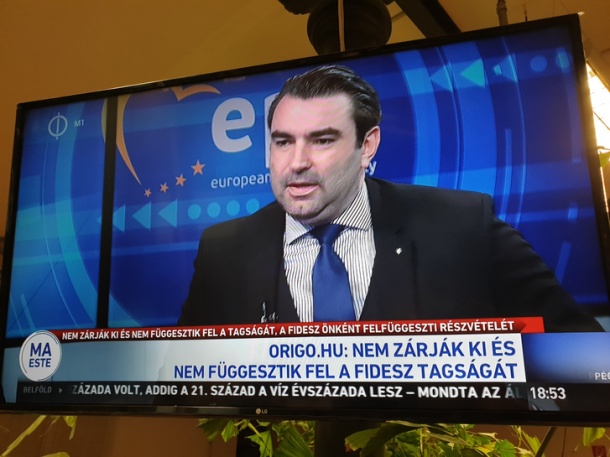 But the winner of the day was Vadhajtások that gleefully announced that the podgy, self-identified “street fighter“, Orbán, delivered a “low blow” to Brussels.

The curious thing is not why they denied Orbán’s humiliation. The real question is why they bothered to even mention the existence of EPP. With such a militant, top-down propaganda machine in their hands, they could just run another success story of how an ugly, old forest gave way to shiny, new sport centers built by the nation’s most generous oligarchs, who deliver it at only three times the originally estimated price because they don’t pinch pennies when it comes to the nation’s health.

Oh wait… that came right after the EPP-headlines:)))