Local mayors are masters of life and death in their villages because they decide who gets benefits. But these mayors are also 100% dependent on central government funding for those benefits (and for everything else) – which, in turn, is conditional on how the village voted in the elections.

The independent mayor of Fehérgyarmat has beaten the Fidesz candidate in the 2015 municipal elections. By 2019, however, he underwent a startling transformation. Last week he couldn’t stop posting about himself on social media as he was calling the locals to vote for Fidesz in the European elections. 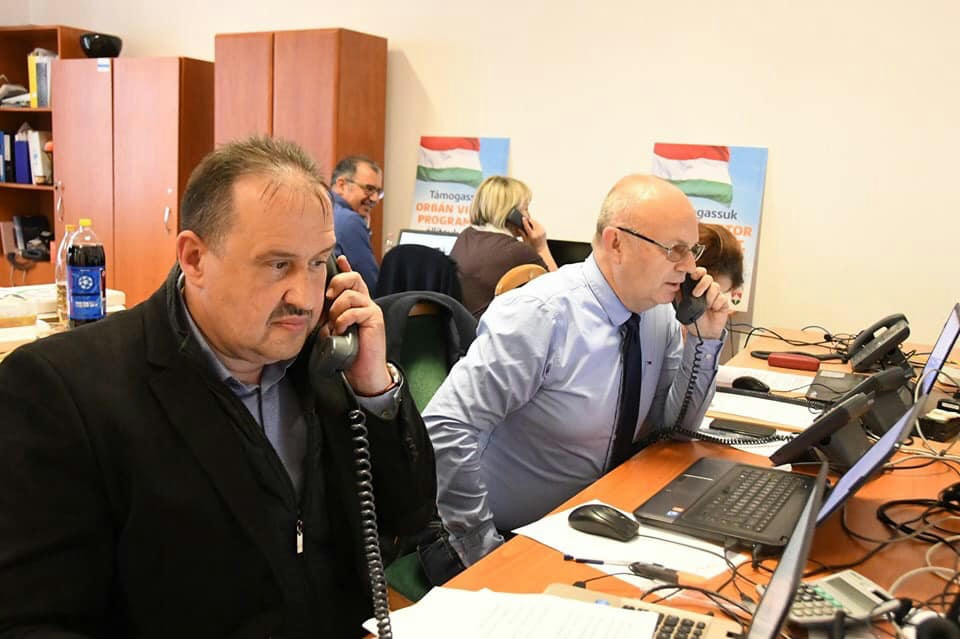 The reason of his conversion is easy to guess. No town or village gets any money from Budapest if they didn’t show strong enough loyalty to Orbán. The word “centralization” is overused and has lost all its meaning, but it is very alarming and real. Local authorities’ tax revenues have been taken away (if any) and redistributed from the center (this particular centralization took place years ago, in an earlier step). Now every renovation of a local school and every cent sent “down” for maintenance, every cent allocated for the local workfare program (replacing jobseeker allowances) is a gift from the ruling power. It is also informally dependent on a show of loyalty.

After the general elections in 2018 many local mayors flipped out publicly on social media for exactly this reason: their villages voted for Fidesz, but not hard enough. ‘How can I govern for the next four years like this?’ asked one of them, after securing only 67% for Fidesz in his village, way above the national average of 48%.

Chain voting and open voting in exchange for benefits

The practice of forcing people to vote correctly is well known.

Take ‘chain voting’, for instance. It has been widely known for decades, it is even taught to students of political science and to election observers to watch out for. During ‘chain voting’ voters are collected and brought to the voting station, the first one gets a voting sheet “correctly” filled. Then he is is instructed to collect his own, empty voting sheet, swap it for the pre-filled one in the booth, and take the empty sheet out with him. The organizer fills in the new sheet and hands it to the next voter and sends him in. In later years, the chain voting method has been digitally upgraded with sending photo proofs of correctly voting.

The incentive to participate can range from a gift (like a bag of flour) to threats to lose benefits if the locals fail to participate. (And there are other methods of winning, but this post only discuses the ones where economic dependence on Fidesz plays a part.)

These once covert methods of extorting votes are becoming the new normal. The way nationwide corruption is out in the open now – so is low level, local criminality, such as chain voting.

A few years ago the investigative journalists at Átlátszó had posted this video of a village, where gypsies are openly instructed to vote for the governing party, or else.

They all tell the same story: that they went for public work to the mayor (because they get no benefits if they don’t get public work for at least a month a year in Orbán’s workfare program). The mayor asked them if they are on good terms with the local gypsy organisation (a code for Fidesz) and if they weren’t, they were told to get lost. When pressing it, they were told that the mayor can’t help unless they support the government.

Apart from fearmongering with non-existent immigrants, the exposure to the workfare program has done it for these villages. When asked about the reduction of their benefits, a locals are aware of it. But they are also aware that even this little money is conditional of their vote for Fidesz.

You can make people’s lives worse and still get their hysterical support – as long long as you also render them helpless. First world thinkers find it hard to understand the power of (perceived) inevitability in human behavior, even though understanding (learned) helplessness is key to minds bent by authoritarian power.

Voting from such dependence, having no choice, seeing Orbán as inevitable leaves even independent minds buckle. The only option they see is to make the best out of the situation, or at least try to have it less bad, to try to live with the inevitable the best they can.

Ever since the first municipal elections in 1990 Hungarians have been observed to ‘vote for the winner’, i.e. to vote for the party that have won the preceding general elections. Living in an opposition town has always meant less resources – under Orbán it means zero resources.

Orbán’s openly admitted policy is to completely starve economically everyone who’s in opposition, to not let them live. It even has a name. It is called ‘NER’ – the system of national cooperation. In the ‘NER’ everyone must be hand-fed from the center. And they must know it. The line of dependence has to be uninterrupted from the smallest peasant to Orbán himself.

This is how mayors end up using office resources to make the locals vote for Fidesz, even if they are not OfFidesz themselves. How are they supposed to lead their towns without money? Without money and against punitive measures from the center?

I’m asking the voters via phone to come and vote on Sunday, as many of them as possible. We are deciding about out future: Stop immigration! (Orbán’s slogan) Source: The mayor’s Facebook

* The formerly independent mayor of Fehérgyarmat was not only campaigning for Fidesz during office hours and using public resources (that doesn’t raise an eyebrow anymore), he was also using the so called “Kubatov list” – Fidesz’ illegal list of voters where they are ranked according to their known party sympathies. The list has been discovered ages ago, back then we were even a bit upset – but as usual nothing happened. The list gets more accurate with every “national consultation” and signature collecting effort. There is no prosecutor in this country who would find fault with any of these, they belong under the ministry.

3 thoughts on “Voting from dependence”