Even before HBO released its show about the Chernobyl nuclear catastrophe, the Russian nuclear marketing has been strong in Hungary.

For the last couple of months I keep seeing these ads on Facebook. 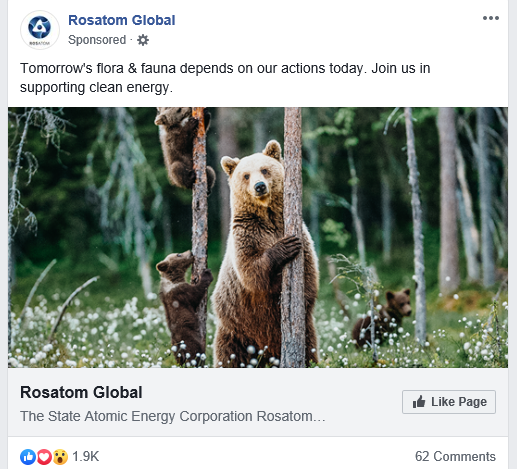 Cute mamma bear and cubs want you to know that Russian atom is good atom. And they are ready to pay for it on Facebook

It is easy to see why Rosatom spends so much to placate the Hungarian population – or maybe they just want to rub it in that they will build us a new nuclear power station whether we like it or not.

It all started when Putin made Orbán sign that we let Rosatom build in Hungary. No feasibility study, zero transparency, shocking environmental concerns, and of course, Russia can charge as much as they want. A Russian bank would lend the exorbitant sum but even the interest rates are to TBD.

Orbán had no leverage against Putin, and even though he tried to drag his feet, Putin has visited him (and ordered him to appear on audiences in Moscow) nearly a dozen times (that we know of) whether he was invited or not. Putin 1) never let Orbán hide the fact that they have met and 2) always pushed that he wants the power station to be built.

This is why Rosatom’s marketing blitz on Facebook and in the Hungarian media can also be read as menacing reminder. Putin wants to rub in the fact that Russia is back in Hungary whether anyone wants him or not. After all, no one is trying to sell me nuclear power stations – just like they don’t want to sell me fighter jets. Yet, every time the Hungarian taxpayer is enriched with new and exorbitantly pricey military equipment, we get their ads.

Make no mistake, that is not for the public opinion. If the public were against them, and if it bothered them for some reason (it wouldn’t), it would be better to just keep a low profile. So when they pay for a marketing blitz, it has other reasons.

Clean energy, that’s all they want me to know…

Looking into the (scarce) details Facebook provides to give the illusion of transparency, I have learned that this ad was targeted at 25+ yo Facebook users in Hungary. And they must be interested in “Nature”.

It is completely apolitical. They just want to tell something to nature lovers…

This is when you start wondering who those thousands of users were who liked this post. There are plenty of old people who would engage with ads (there are even people who comment under public posts by newspapers!!!) so it was not entirely unlikely that I would find actual comments. And I did find a few.

Sadly, most of the comments have been moderated by the time I arrived. This was one of the few real opinions: 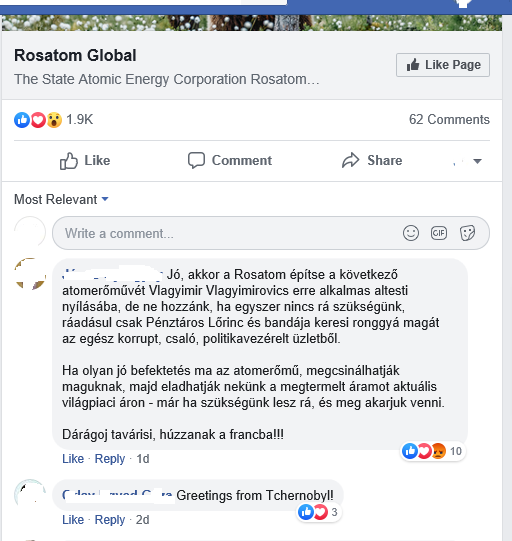 This user is suggesting Rosatom to build its new power station in the nether regions of certain Russian leader. He is also furious about Lőrinc Mészáros, Orbán’s alleged business avatar, supposedly making a killing on a project this size. “If nuclear power stations are such great business, why don’t they build one for themselves and sell me the electricity at market rates – if we are willing and actually need it.”

Most of the “comments” by supposedly real users were, however, just adoring emojis and stickers. For a Russian state nuclear agency. An odd thing to inspire such emotions. Apparently even the troll farm doesn’t know why a Facebook user would love their ad.

Most of the uncensored comments were inexplicable, adoring emojis and stickers. If these are real users, I am a nuclear physicist…