Orbán set the tone of his next communication offensive at his annual state-of-the-realm speech in February 2019 (it is breeding) – and his loyalist media quickly got down to push the message in painfully granular details. Hungarians are now reminded through every communication channel that they are essentially breeding livestock, and even the most determined naysayers are apologetic towards the breeding-principle’s underlying premise: collectivism.

Orbán’s top loyalist, Fidesz co-founder and verbal henchman had given us another disgusting taste of this mantra at Orbánists’ annual summer camp in Romania: we need to outbreed the wrong kind, the nasty Muslim people in Europe, who outbreed native whites a hundredfold. (He said worse things but I refuse to spend life on translating it.)

So it is probably time for a reminder: outbreeding the wrong kind is not success. Success is success. 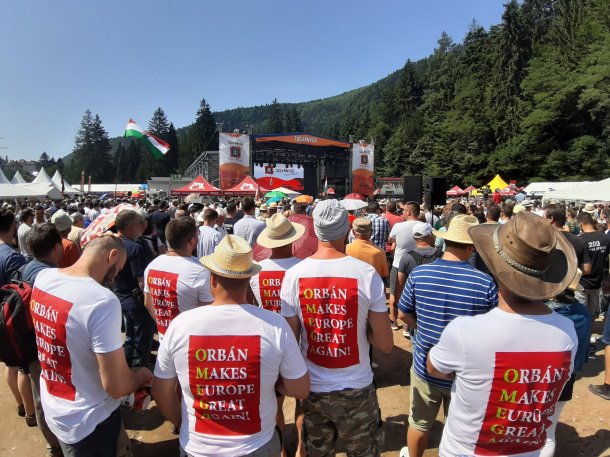 Outbreeding others only makes sense if you have no viewpoint of your own – only that of your group. In other words: collectivism. If breeding was the key to success/happiness/anything, we would all be busy trying to migrate to Africa (rather than the other way around) and rabbits would have landed on the Moon.

It has a number of (painfully obvious) reasons.

Headcount doesn’t ensure economic success. Growing population doesn’t make Uganda rich and space age innovation doesn’t routinely come from Mexico. In other words, even in collectivist, country-based, terms breeding is nothing like success. The key to economic success lays on an entirely different axis that puts quality over quantity when it comes to human resources. And it requires the freedom to set your own course in life, the opportunity to enhance your life through your own effort, and lots of other things – neither of which is breeding because the king said so.

This is why breeding doesn’t ensure ideological success either – despite what its proponents peddle. Here is a nice summary from Houellebecq about the way religious people try to sooth themselves that religion is successful. (In terms of outbreeding others, not in any real sense.)

“Basically, they argue that belief in a transcendent being conveys a genetic advantage: that couples who follow one of the three religions of the Book and maintain patriarchal values have more children than atheists or agnostics. You see less education among women, less hedonism and individualism. And to a large degree, this belief in transcendence can be passed on genetically. Conversions, or cases where people grow up to reject family values, are statistically insignificant. In the vast majority of cases, people stick with whatever metaphysical system they grow up in. That’s why atheist humanism – the basis of any “pluralist society” – is doomed. Monotheism is on the rise, especially in the Muslim population – and that’s even before you factor in immigration.”
Michel Houellebecq: Submission (2015)

So it’s genetic, no less. Right. They also use the success of an idea and the success of a person interchangeably. They can because no one will notice. Everyone will freak out at this confident boasting and doesn’t even dare to look at it from an individual point of view – never mind the perspectives of economics, innovation or quality of life. Their definition of success is questionable – if it even exists.

Outbreeding others only makes sense in a collectivist mindset.When you lose your own viewpoint and think as if you were your own prime minister / president / church leader / dictator. But you are not.

When we confuse our viewpoints with that of our leaders, we are all victims of the way they taught us history in school:

You may or may not remember anything from history classes. But you definitely still apply the implied message: that success is a group-thing. That a country is successful when it’s biggest on the map. When it conquers. That national pride matters more than national success – let alone individual one. (Except the personal pride of the king, because we must all suffer for that. How appalling is that?)

But bigness on the map doesn’t equal to the happiness of its population. Or their success. Or that someone will invent medicine there. Only a person can smile or be happy. Only a person can invent things. Applying these notions on groups creates the illusion that we need to pursue group success. Perpetuating the species, even if we all suffer. A nation of million crawling poor is more successful than a thousand intelligent and successful individuals.

A group can be (called) successful even when every member is miserable. And that is what fundamentalists and nationalists peddle. Subjugate half the population into slavery (unpaid household and sex work, which I refuse to call marriage), the other half to political powerlessness (the same as being a wife, just vis-a-vis the king). Subjects may be miserable and subservient but they’ll hopefully outbreed the enlightenment-folk and take their land. And keep being miserable there.

The question came up in relation to the increasing migration into Europe as Middle Eastern dictatorships burst and African economies cannot keep up with their own population pressure – let alone the corruption of their kings and leaders. But it should be the other way around. The population is growing alright over there, the so called family values are thriving and women’s submission is much more secure than in Europe. And yet, they are not successful enough to retain their folks.

A breeding-focused economy didn’t even succeed in terms of GDP. Fundamentalists got all that unpaid work out of women, they relieved the male half of the population from the burden of female competition for the ownership of resources – and they can still not produce a cent of GDP that is not based on oil or tax havens. Why is that? Fundamentalist collectivists secured the perpetuation of their own kind but sustainable economic success still eludes them.

I think it’s time we put the population=economic success fallacy to rest.

Besides, outbreeding others is also tribalism (not that anyone affected cares). Those who fret about the decline in a population want to outbreed the wrong kind of humans. The other tribe, the other religion, the other race. In short, the breeding dogma is inherently racist. Not that it makes its proponents feel ashamed. They are not-racist-but.

As a non-religious person I always had a beef with the way fundies treat women. Religions are inherently misogynistic and yes, religious women are misogynistic too. It hasn’t been PC to blame Islam, but it is OK to bash the local Christian parties, who routinely submit laws to limit women’s rights. Because family. I also look in horror at the Haredi Jews and their medieval birth rates and the Quiverfull cult, the most despicable Christian group I had the misfortune to learn about. Having a TV show dedicated to their fertility porn is probably the lowest point reality TV has ever sunk to. Breeding like rabbits is the hallmark of a society/culture/civilisation stuck in its self-inflicted childhood. If it was up to them, they would also still die at medieval rates.

The response to this nonsense is not a counter-religion, not a counter-fundamentalism and out-breeding them – but secularism. And again, human rights. Liberate those women from their choice-less lives and you will see reason in birth numbers. You will see education. You will see choice and freedom and success.

The one thing where population matters is the dumbest interpretation of democracy: majoritism. The idea that whatever the majority wants should happen (as opposed to whoever the majority elects should decide, let alone any idea that is even less far from the truth) – combined with identity politics, when my group dictates my stance on every (usually false) problem and prevents me from thinking about it myself.

Yes, there’s room for improvement there. But not through multiplying the numbers of the right kind.

The answer is understanding what made Europe great, what makes it desirable, what democracy should be and the spreading of enlightenment, human rights, secularism, and women’s equality among those still missing it.

This post is not your usual Malthusian whining. I am not concerned about resources and sustainability here. If the only spirited opposition for outbreeding the wrong kind is self-annihilation based on sustainability concerns, we have another war of the idiots on our hands. People fix problems – provided they have the freedom to do so and they can get to keep their reward for it. (As opposed to expected to do so and henceforth not rewarded.) They can figure out ways to handle the sustainability crisis – unless it deteriorates into another quasi-religious war between two collectivist fallacies, the environmentalists and outbreeders. Which it most likely will because both thinking mistakes are so awfully catchy and both camps are so menacing towards individuals who might have ideas.

My concern with the global population boom is the relative value of a human life and the impact of feeling replaceable and disposable. We already know how it looks like when the collective reduces a group of people to be all but a function. Women in these medieval societies are mere reproductive functions and no one in their right mind wants to be one of them. But in an uncontrolled population boom everyone is worth less, not just women. Just look at the sheer number of aspiring talent in your own field.Look at how many applications you get for any desirable thing. How many other people one has to outshine, outperform or outscream to be heard. Compare it to 200 years ago.

How can someone not feel inflated and worthless?

In behavioural science ‘societal collapse’ or ‘behavioural sink‘ describes the consequences of overcrowding. When population density gets out of control, things unravel psychologically, even in the abundance of resources. Disturbance, alienation, behavioural collapse – the analogy between Calhoun’s famous rat experiment and human populations is simply too tempting to ignore.

The answer to the problems caused by overpopulation is not more people of the right kind. It is to stop treading on each other and to give back the individuals the right of choice. In both kinds of societies, the right kind and the wrong ones.

Also, it may be worth to take some courage and face some frightening thoughts: that the entire need to ever-growing population rests merely on the faulty design of pension systems – and entirely man-made and historically recent phenomenon.