Less than a month before the local elections, the minister heading Orbán’s office announced that Budapest would lose a billion forints in government funding if Orbán’s candidate doesn’t win.

That amounts to a threat – but that’s only a surprise for those born yesterday. 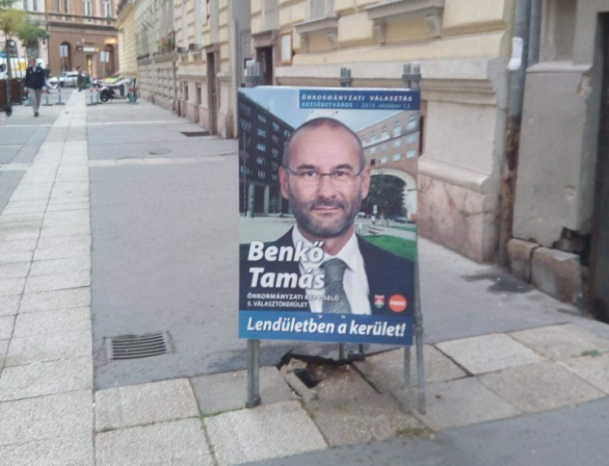 Fidesz’ candidate’s poster is used to cover up a pothole on a Budapest sidewalk Photo: 444.hu

Remember those local mayors who panicked after the 2018 general elections because Orbán’s party didn’t won hard enough in their village? It did win, mind you, it even made 60-70-80% – but that was not enough. Because whatever the number is, that will be their number for the next 4 years. That is their humble offering to the feet of their overlord, and although it may not mean much to Him, a low number (like 67%) will definitely pull His wrath. Or that of His powerful and unscrupulous executioners. That number will be rubbed in their face, it will be brought up every time they beg for money (and they will because they have no revenues of their own), and if the number is really low, they might as well forget getting any funding from the Party for the next years. Their revenues were all taken away and centralized early under Orbán’s rule, so they are all completely dependent.

Think about it. Orbán personally made sure that the election law is as biased toward his party as it can be. He made sure the media doesn’t show a single opposition politician or a dissenting opinion – only when they are smeared and accused of being traitors and migrant-hugging liberal-bolsheviks (whatever that is). Orbán made sure there wasn’t a single opposition advertisement or billboard to hit the eye of locals. So what else do local government officials need from Him to deliver the 100%? Does He have to do everything by Himself?

As a rule, the smaller and poorer a village, the higher Orbán’s win. The poorest ones deliver the coveted 100%, no matter how suspiciously. And since the 2019 local elections are pretty much the last hurdle before Orbán 2030, minions and executioners are running amok going below and beyond to secure Orbán’s win. As time passes, they are also getting more desperate, as their names are attached to a number of corruption cases and Orbán started mini-purges, just to remind them that they have more to fear than not getting any more money. (It also looks good as publicity – at home and in Brussels.)

So when Orbán’s mouthpiece minister held a press conference just to threaten Budapesters not to vote for the opposition, it surprised no one.

Of course, he was reported to the election committee for using his office to influence elections – but the election committee is choke-full of Fideszniks, too, so they have ruled that the minister was all but legally obliged to warn Budapest citizens that they would lose money if they voted wrong. And this ruling hasn’t surprised anyone either. So the message was repeated a number of times. The Party is the state.

The same thing is going on everywhere in the country. After all, Orbánist candidates’ best selling point is the money (taxpayers’ and EU money) they may be able to attract as loyalists. And the opposition can be bashed as drying the town or village they win. Fidesz urged Szeged, the only major town that hasn’t yielded to Orbán yet, to “join the path of development” and vote Fidesz this time. The locals know what it means to be left out of “development”. The town has been continuously punished for nine years for being so stubbornly non-Fidesz.

It has been 9 years now. Say, between your ages 25-34. Have you had enough of your little tantrums yet? Have you finished being stubborn for nothing? Do you want to start a family or not? Why keep resisting? Change your mind and then voting for an autocrat won’t even feel bad.

Remember this Fidesz mayor who very colorfully explained what happens if voters dare to support an opposition candidate? “If our MP won’t be of Fidesz, we will suck d*ck“, he said. The only thing that separates these towns from others is that someone posted the video on Youtube.

Regions, towns and villages have every incentive to vote for the winning party at the best of times. They get more resources from Budapest and their cronies get to bathe in public funds for the next four years.

In 1989, local elections have been set to occur after general elections, for this very reason: to let the voters make an informed choice of whether they want money from the governing party or not.

Under Fidesz, the pressure got even higher. Not only did the size of the available public funds balloon a hundredfold thanks to EU-funds, the opposition towns’ share of the cake has been set to exactly 0%.

Not only that, but by 2018 everything has been centralized, local authorities are not allowed to keep any revenues, even new chalks for the schools needs to be procured with funds from Budapest – which rarely comes.

But when the money comes, it is a mixed blessing at best. As accountability of the political class approaches zero, their reason to share any of the money coming from Orbán with their fellow locals evaporates. The “path of development” centrally distributed (Hungarian taxpayer and EU) money represents is more like a path to hell. One-off corruption opportunities, overpriced white elephant projects, swimming pools, stadiums and unnecessary spas that will bankrupt their town with maintenance costs – but bring exactly zero benefit – economic or otherwise. Chalks will never be financed by the regime, schools are crumbling next to mega-stadiums with heated lawns and without a team that could play football. EU-funded watchtowers in the middle of nowhere fail to attract crowds of tourists to fill the rooms of the thousands of EU-funded hotels and spas – although they do provide a one-off enrichment opportunity for the local Party functionaries. And that is really their point.

So as far as Budapest is concerned, we may only lose “developments” that really just means chopping off all the trees and replacing them with absurdly overpriced stone surfaces right from the stone mines of someone the press doesn’t even dare to talk about anymore.