Despite all the verbal catfighting and his faux free market image, the Orbán-government is very generous to multinational corporations. Especially German carmakers. 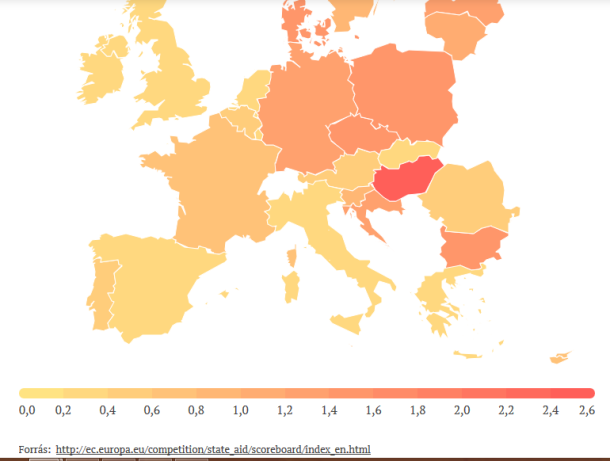 In 2017, Hungary spent most on state subsidies to multinational corporations in the EU – 2.6% of the GDP Source: index.hu Data: European Commission. (Excluding railway subsidies)

It is in some sense the gauge for economic corruption. How much does a government take away from taxpayers to spend it on irrational and downright harmful things. Such as making the economy lopsided, tilting towards the past, and dangerously exposed to a single economic factor outside of anyone’s control: the health of the German car industry.

On average, Orbán spends more on luring multinational companies into the country than it costs them to pay the wages of the people they hire here. Discretionary government orders spend billions in non-refundable state subsidies to sweeten the deals with multinationals. In effect, Orbán is spending taxpayer money to buy jobs that cost more than they make – to the employees and to the taxman. But it sits well in his god-like self image of a father who tells everyone what to do – and his dated vision of an economy that consists of factory workers and agrarian peasants. Must be growing up in communism and listening to too much Marx at home.

In 2016 alone, corporations (mostly German carmakers) received up to 110 thousand euros per job created in Hungary – through discretionary decision of Orbán. And the spending never stopped. According to data gathered from kormany.hu, index.hu created a chart about discretionary government subsidies to multinationals in Hungary. 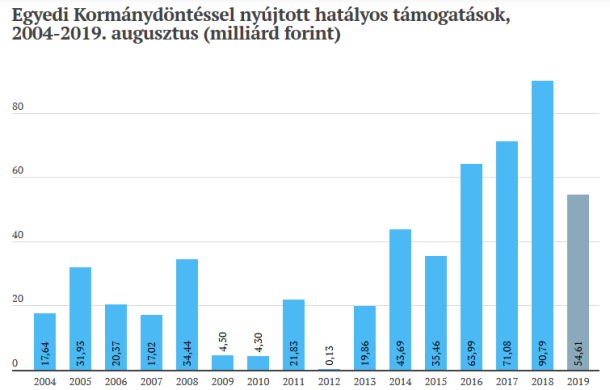 And the entire insane exercise looks even more futile when we take into account that there aren’t even enough skilled Hungarians left to fill those jobs. Jobs that the taxpayers bought them at a hefty price.

The most recent development of MOL, Hungary’s energy champion is even rumored to be built with guest workers. MOL also happens to be the company that received the most for new job creation, over 200 thousand euros per person to be precise.

At one point and on the level of mere words, the government appears to see the problem, but that doesn’t make them to stop. Foreign minister Szíjjártó even promised a “dimension shift” towards more value added sectors and innovations – two things governments have no clue about, by definition.

Politicians tend to push the same topic decades after it becomes obsolete. I expect them to keep pushing for “job creation” for years and years to come, spend (corruptly) insane money on it, and keep campaigning with it. After all, they conditioned the voters to want “job creation”.