Légió Hungária is a new neonazi marching group in Hungary and they chose the anniversary of the 1956 anti-Russian revolution to attack a (closed) pub, run by a Jewish youth organisation.

Légió Hungária, a Neonazi group charged at a pub and burnt its rainbow flag when they found it closed. They’ve left their nazi symbols behind. Photo: Cseke Balázs / Index.hu

Once they found the pub closed, they burnt the rainbow flag they found on its facade. Then they went on to march down Nagykörút in a demonstration of power. 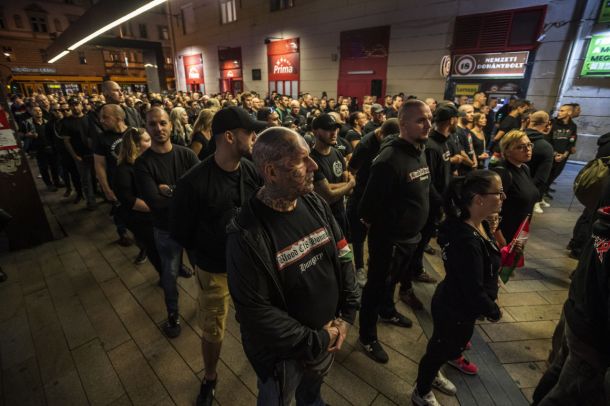 Auróra is often in the news as the target of local Fidesz, as every bureaucratic excuse is used to try to shut them down. It is owned by a Jewish youth organisation and the neonazis also associate it with homosexuality. And now they found it timely to attack it. On a public holiday. In broad daylight. And left their stenciled insignia behind.

The Israeli embassy, the American Helsinki Committee, even the American ambassador had denounced what happened (even though he is very close to Orbán) – but the Hungarian government didn’t.

And typical to our state of mind these days: Everyone was wondering whether Orbán unleashed the nazis on us in revenge for his surprise defeat at the local election ten days prior. Something of this magnitude cannot happen without authorities’ informal permission – or so many believe. According to the sentiment, a bunch of nazis can only march on the streets of Budapest if it’s politically opportune for Orbán.

Which it is. Not that he will be an open anti-semite from now on. That’s a simplistic assumption. It wouldn’t bring him anything he doesn’t already have. But with the nazis marching the streets he can go back to posing as the last bastion standing between the nazis and civilization. And that is a line that always works when he’s abroad in the US or Western Europe.

Actually, even Alcee L. Hastings of the American Helsinki Committee and US Senator Ben Cardin expressed a sentiment similar to the rumors on the street, pointing out that authorities also failed to act when Auróra was attacked last month by homophobic members of some other new extreme right splinter party. They are like mushroom these days.

This particular branch, Légió Hungária, is calling themselves “ideological warriors” and the rainbow flag “the Soviet flag of modern days”. According to 444.hu’s summary of their activities so far, they held the “conference of racists / race defenders” earlier this summer. They aspire to become what they call a “people’s terror organisation” with small “elite groups” executing the attacks – but they just sound like Fight Club without Brad Pitt but with ethnic and racial overtones. And as if they came from the past. They quote every nazi and hungarist leader in the history book and had a Russian speaker at their event on October 23. Of course they did.