Orbán’s breeding program regards a female breedable for up to 40 years of age – a shocking concession from the proudly sexist and aggressively woman-demeaning Fidesz. It begs the question how it could have happened.

Luckily, demographers were there for us with an explanation. Also, with the bad news that even 40 is too little, too late.

Regarding women women (target group for legislative manipulation of their reproductive organs) until the age of 40 sounds so enlightened, you would expect a semi-enlightened Scandinavian politician to say that. (Not a fully enlightened one, because an enlightened politician would never engage in breeding policies.)

So when King Orbán said that the wife loan can be handed to women up to 40 years of age, there was a surprised wuuut? (But of course women still have to be good girls and be in their first marriage – and the loan turns into a subsidy if they produce three children into that same marriage and don’t divorce for 20 years. I was half-expecting that they would also have to be virgins to deserve the King’s generous help.)

For those who had been living under a rock, let me spell it out: Suggesting that you are only human (man/woman) as long as you are useful (fulfill your gendered function) is an authoritarian staple. It hits men and women alike, and for women it means that they have an expiration date according to their reproductive abilities. It is a tool to induce anxiety and a tool to manipulate them grabbed by that anxiety.

So 40 is a remarkably soft approach from an autocrat. So much so that it demands an explanation.

Fertility rate has been steadily shrinking in Hungary in the 20th century, with the exception of a period of aggressive abortion ban by the communist regime in the 1950s. Just as illiberals do it today, the then communist regime appointed a woman to give her name and rock solid loyalism to the policy. Her name was Anna Ratkó and the dark period of her reign is called the Ratkó-era.

Ratkó was not above the central planning instinct of lesser minds (no one was back then) and eagerly executed an aggressive abortion ban and a tax on childlessness – a program that the comrades from above handed her to spearhead. She was the minister of public welfare (of course) between 1949-56, during the darkest times of communist oppression. The anti-Russian revolution of 1956 ended her policies – sadly not the oppression as Moscow crushed the revolution – but the impact of her unholy activities remained with us and doom us to this day.

Because the Ratkó-era gave birth to a particularly large age cohort called the Ratkó-children (like Boomers in the West, just not that lucky), sending waves through the age tree of Hungarian population. The age tree chart of the Hungarian population contains clearly visible waves of baby booms, starting with those born in the 1950s. The waves are the consequence of a particularly restrictive and aggressive abortion ban by the communist regime, named “Ratkó-era”, and the resulting children are called the “Ratkó-children”. The first birth-related state subsidies were also introduced at around the same time – unsurprisingly from a central planning communist regime. 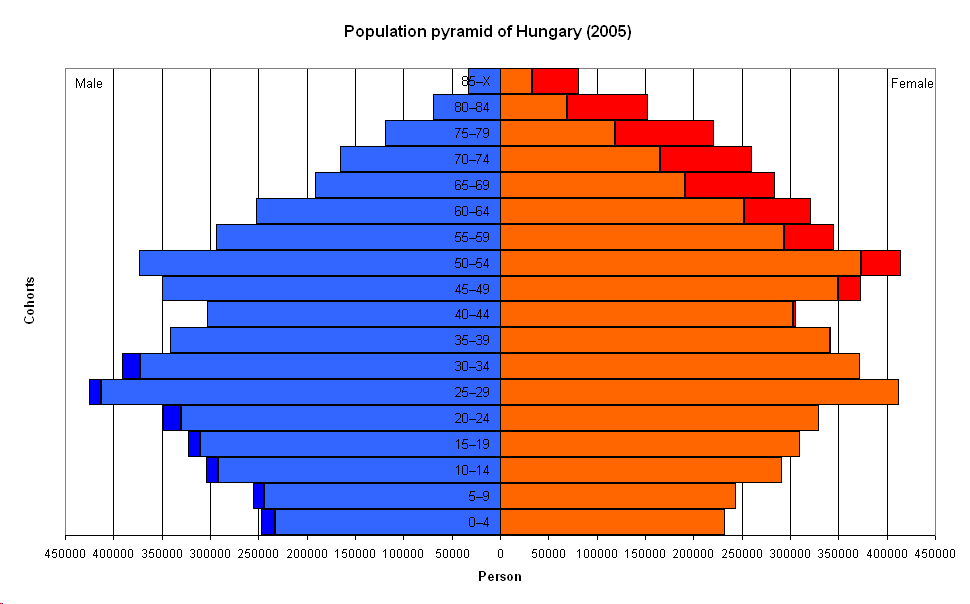 Children and grandchildren of the Ratkó-era visible as two waves on the age tree (in their 50s and twenties in 2006) Source: Wikipedia

The above age tree is a bit outdated. Since 2006 the age tree has been updated. Note the missing “Ratkó-grandchildren”. There is no third wave.

The waves of those babies’ children and grandchildren are clearly visible as peaks on the demographic tree. The children of the original Ratkó-generation will be fully retired by 2020, their children are in their forties and their grandchildren are scarce. From this perspective making the cut-off age at 40 is even too late, rather than too liberal.

For an authoritarian government like Orbán’s to regard 40-year-old females as persons of fertility policy interest looks like a surprisingly liberal-minded thing to do – until we take into account the age distribution of society. The Ratkó-grandchildren have not been born (the third wave on the age tree hasn’t appeared), while the children of the Ratkó-generation (born around 1974-75) are now in their 40s. In other words, Orbán went as high as his contempt for women allowed him because his anxiety to squeeze more babies out of them was higher. But it was not high enough to admit that this painful generosity was still too little, too late. The last numerous age cohort of unruly (not-yet-a-mother-of-three) females are out of their breeding age and the younger ones are unlikely to deliver enough new taxpayers to make Hungary great again.

If Orbán was a farmer, he would run out of livestock.

Future population projections by 2060 – high and low projections. The baseline forecast population of Hungary for 2060 is under 8 million, from 9.3 million in 2013 (Source: Demografia.hu)

The working age population and thus the income tax base has been shrinking even faster than the general population due to the added effect of emigration.

The hypocrisy of the demographic governance becomes immediately obvious when one contrasts it with policies that alienate and drive away those who are already born and educated. The dismal state of healthcare, the breathtaking dumbing-down of education on every level – often and rightfully contrasted with mushrooming football stadiums, money wasted on football and siphoned off with the excuse of sport events.

The latest official numbers have put the number of people born in Hungary working and living abroad to 600 thousand – but that still sounds like a conservative estimate. Some estimates go as high as a million and above – or ten percent of the country’s population, living abroad. The fertility rate among emigrants (as assessed by the number of requests for citizenship for babies born abroad) is higher than of those who stayed in the country.

Because there are things, immaterial things, that actually stimulate the desire to procreate – but an autocrat cannot deliver those. One of them is the sense of legal and economic security. That one has rights and one can build – it won’t be taken away. Dignity. Another one is sharing the burden of childcare – but a past-dwelling authoritarian would never let a female off the hook in any sense, so this one is out of the question for them. Indeed, there was absolutely nothing aimed at fathers in the program – it is arguably less pleasurable to write legislation about male sex organs.

Also note that such a policy ignoring fathers is rampant sex discrimination – not that any authoritarian cares. No one even assumes that a man would ever want to have anything to do with parenting or that a woman might be the breadwinner. In fact, autocratic countries are unique in the sense that only women have children there. Men have nothing to do with reproduction even though it is totally glorious.