Fidesz (or their followers) is in a very poor mental state after losing the mayoral seat to the opposition.

Once again, it is as we were thrown back into the 1920s or 1930s. Certain triggers bring out the same reactions from people as they did before the last European genocide. 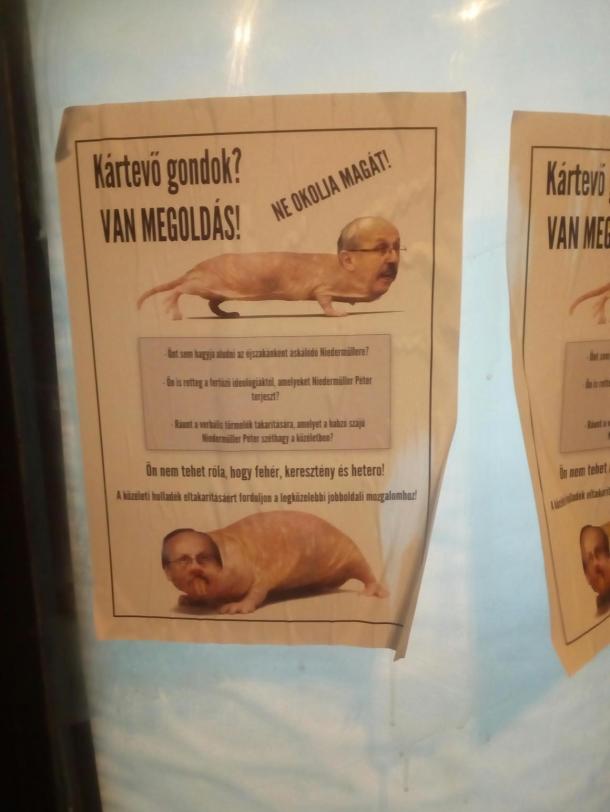 “Pest problems? There’s a solution! Are you sleepless from Niedermüller conspiring in the night? Are you terrified of the infectious ideologies spread by him? Are you fed up with the verbal debris left behind wherever he goes? It’s not your fault that you’re white, Christian and hetero! To remove the trash from public life, turn to the right wing movement nearest to you!” Photo: 444.hu

This morning the above flyers appeared on the streets of Budapest’s 7th district. We don’t know who did this, we don’t know whether it was from Fidesz or just from one of its overzealous followers – but the problem is that it doesn’t matter. This is the state of mind we are in.

Fidesz is organizing a protest against this mayor (called Niedermüller) this afternoon because he mentioned white Christian males in an interview – a well-known trigger for the nationalist victimhood narrative.

Now he is called racist by Fidesz. The Fidesz that attacks Muslims, migration, gypsies, foreigners and Jews openly and on every level. Niedermüller’s remark on white males was not because it isn’t true, but because he made being an authoritarian Fidesz-follower into an identity issue – and with that he jumped on the identitarian bandwagon. You cannot win there.

Making it an identity-thing will always backfire because identitarianism is the home turf of illiberals, nationalist, Orbánists, etc. globally. I don’t particularly like this mayor, nor his party, but the fact remains that the Fidesz-side now feels entitled to make such posters. And they mean it.

Back in October when they lost their seats, some of the Fideszniks truly didn’t believe that they would actually have to hand over their seats for something as irrelevant as an election result. They thought we were past the age when election results matter and voters could unseat Fidesz. They were waiting for say-so from above in their own party, and even then they were reluctant to leave office without revenge. They truly believed that the age of politics was over – and all we have now is the rule of Orbán, who regularly calls for stomping on the enemy and doesn’t even regard non-Fidesz entities as legitimate players – or even as humans that should be allowed to exist.

This is the mental state of the country right now. It took years of warmongering, it took years of painful, silent resignation, but it happened. After all, during the election campaign Fidesz put posters with the face of George Soros on the floor of public transport vehicles so people can step on him. (Yes, it is 2020, not 1938.) And this mental sickness would linger for generations even if Orbán disappeared today.

UPDATE: Niedermüller’s party just posted a video about a dead rat that has been sent (according to the package) by one of the extreme right revisionist youth movements. Evoking the darkest times of history indeed. The rat has the mayor’s name in it. (For those who are following the depressing moral decline of the self-righteous nationalists, here is a reminder of a slaughtered pig with George Soros’ name – by a Fidesz MP.)