I ran into this old board game on a flea market. It is called Save! and it is an old version of the state-sanctioned board game we used to play as kids called Save Cleverly! or Be Economical! (Hun: Gazdálkodj okosan!)

The old board game called “Save!“

It has been bugging me for a while. What does it tell us about the kind of mentality we absorbed as kids?

Year in year out Save Cleverly! has been The Board Game under socialism – even in its late phase. It was mind-numbingly boring, but it was pretty much the only game everyone had at home so we played it often.

Its rules were simple and depressing. You had to keep going around the board, collecting your 100 forint salary each time you crossed the starting point. Occasionally you could step on a field where you could win some extra money, such as the lottery or the luck cards – but the luck cards could also mean bad news. Sometimes you got a little money into your savings booklet (takarékbetétkönyv), a state-supported form of putting your money aside.

The only memory I have about these savings booklets is that we were encouraged in school to give up some of our little lunch money (if any) to buy stamps into these booklets, teachers were pushing them and were were good children if we bought stamps. It was probably meant to teach you to save (even though it did not accrue interest). In the end it taught you another lesson instead: You never got your money back. It went forgotten.

At any rate, it takes time to collect enough money in Save Cleverly! to buy an empty family house (seen on the left of the picture above). It is a sheet of paper with the outlines of furniture drawn on it. You could buy it outright, or step on the field of the state bank and get a mortgage.

And once you had the empty family house, you could start saving to buy the mandated furniture in it: bathroom furniture, living room, TV, vacuum cleaner, bicycle, ping-pong table (a communist success sport I gather), kitchen and fridge. 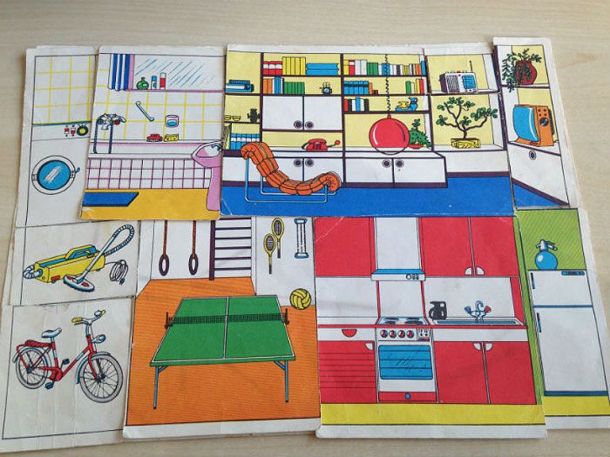 This is how a full house looked like. When you were the first to have bought all of them – you won.

Difficulty: you could only buy anything if you stepped on a field where it was available – reminiscent of years-long waiting lines for buying anything under a command economy, even if you somehow had the money. If you were particularly unlucky, you could circle the board never having a chance to convert your money into anything.

You lost money, too, as you circled the board. Every time you stepped on a field of entertainment, for instance, you had to pay up. The zoo, the restaurant, the cinema, even the public transport cost money – and the field duly noted how much of your salary you have to give up. A holiday in one of the holiday camps of the socialist state’s workers set you back quite a lot.

And there were the tedious educational fields called “Don’t smoke!”, “Don’t loiter!”, “Excercise!” that did exactly nothing in the game – so you learned to hate them the same way you hated the prison field. It just locked you out of the game for a round.

But this was the 80s version of the game, already softened (see: happiest barrack). In older versions of the game there were even more cruel forms of citizen education:

I looked up the game to write this post and found that the original idea for the game was to sneer at Monopoly – it was named Capitaly. But it sounded too imperialist, so it was banned in 1952.

Instead, the state launched the board game called Complete the Plan! (as in central economic plan, 5-year-plan, etc.), where the task was to increase the living standards in the economy, making players to think like tiny little central planning demigods, hovering above the economy and all the people in it, telling everyone who should do what and what kind of live to live.

In 1966 a new version came out called Save Cleverly! for the first time. Its various iterations bore various marks of the era that produced it. And keep in mind, these were all state-ordered, state-designed, state-mandated games with state-serving educational purpose. It was never meant to be entertaining, that was never the goal. You couldn’t buy other games because there weren’t really any alternatives. Even by the 80s, when I became an unlucky victim of this state indoctrination tool, the alternatives were scarce. I cannot recall any, but there probably were other board games at the time. By 1989, more than a million copies were sold.

The spirit of the game was that your game has nothing to do with others’, your progress has zero impact on others’ – in curious contrast with the zero-sum propaganda of envy and class warfare of the time.