Corruption is a feature, not a bug / Data

It is always news when our country is at the bottom of yet another international comparison. This time it is in the amount of EU funds that are spent without even the pretense of transparency and non-corruption.

I passionately dislike international comparisons because of obvious flaws of methodology and lack of context. But EU funds are the cornerstone of Orbán’s patronage system and the funds he used to feed his loyalists on every level. Without EU funds he would have been out of power long ago, and maybe even back in power – but at any rate, he would never have gathered too much power to be unseated by elections. But he did.

And the way to do it was to make sure all EU funds are distributed through him. And that his henchmen are all powerful on their own little turfs by being the men who can bring EU money. Because they are Orbán’s men.

The system worked too well. Even though European prosecution is not allowed into Hungary by Orbán, OLAF’s latest report revealed just how many corruption cases are still visible from Brussels.

In short, ten times as many as the EU average. 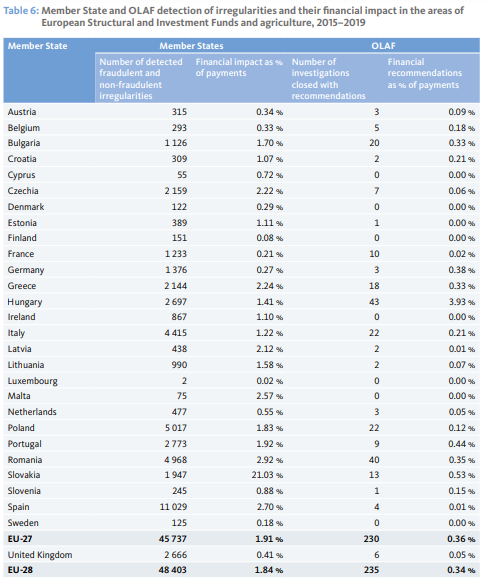 There is of course a gap between national and OLAF-induced investigations. Even though Spain appears to be leading the way in the number of cases started by local authorities, only a few OLAF cases end in recommendations against them. But when it comes to the amount of money reclaimed as percentage of the funds, Hungary leads the way by an impressive margin. In short, ten times as much money is reclaimed by OLAF as the EU-average.

I was personally surprised that there are even investigations that the Hungarian authorities supposedly start against fraudulent spending of EU funds, but there must be a lot of such cases against non-Fidesz entities from before 2010. Never mind that the data is between 2015-19, every time there is an accusation that Hungary might be corrupt, the government’s go-to response is that it is just pre-2010 corruption ruining the statistics. The poor victims:(((