The European Union has a lot of problems – but Orbánism has a lot more. At least that’s what Hungarians seem to think after ten years of shrill and hysterical anti-EU propaganda by the Orbán-government.

The data is even more spectacular if we look at the ten-year change, corresponding to ten years of Orbán’s control-less rule over the country and media.

Tárki published a report (pdf) using data from Standard Eurobarometer and found that support for the EU has risen most sharply in Hungary between 2009-2019, during the Orbán-era.

The EU-average of those who find the European Union fundamentally useful in the entire population rose from 67% to 78.8% between 2009-19.

Hungary is leading the way with 88.9% supporting the EU, a whopping 50.3% increase in ten years. 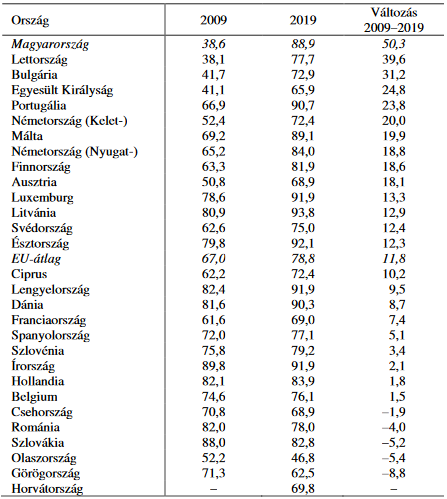 And what ten years!

The Orbán-government spared no taxpayer money to relentlessly undermine the EU’s popularity.

Just think of this months-long multimedia campaign covering all billboards, every screen and print media – not to mention Orbán’s talking heads. It was crowned with a loaded faux questionnaire sent to every household informing every Hungarian why to hate the EU and crowned with an anti-EU referendum.

Or this little detail which is typical of the style of communication about Europe.

Hungarians also support the euro very much. No wonder, since the central bank is merrily devaluing the forint to serve Orbán’s momentary political purposes. Among the countries that are not yet members of the Eurozone, Hungary leads the list of popularity of the euro by 69.7% support for joining  the Eurozone ASAP.