Orbán has been posturing as Our Savior From High Energy Prices ever since his 2014 reelection campaign. He remained The Savior even after energy prices went way down and the price controls he introduced meant artificially inflated prices for consumers. They have never heard of their own rip-off and kept worshipping Orbán for it.

But trends have shifted and it is only a matter of time before consumers will be made to swallow even bigger prices, when the state controlled prices catch up with the markets. But not before the elections, of course. 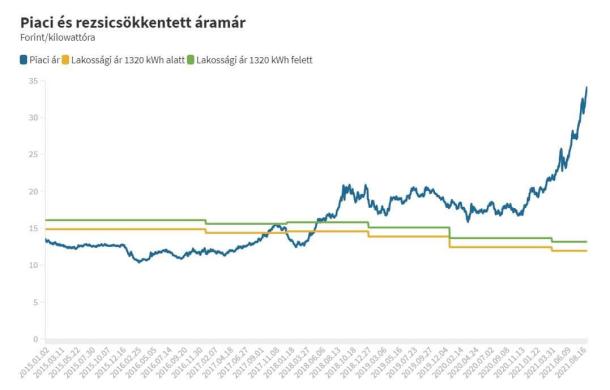 Market price (blue) vs state controlled energy prices for Hungarian consumers (green and yellow) Chart: Vakmajom FacebookOrbán won the 2014 elections with the price control of energy and utility bills. For a few years, market prices sank below the state controlled price, securing a dreamy profit for the cronies who took over the utility and energy companies.

But the market has flipped and it has been way above the state controlled prices for two years now. It is causing pain to the cronies but they have to swallow it at least until the next elections in 2022.

They may be allowed to reap unearned profit by law and collect astronomical sums of public money for lame and criminally unnecessary projects, but they are also obliged to swallow any losses when it comes to – no, not the consumer, but Orbán’s reelection. After all, he made the oligarchs, he secured their profits by law, he gave them their fiefdoms and he enabled them to buy up entire industries and the whole land.

And even though these honorable gentlemen and self-styled aristocrats are not used to endure losses (they only buy up stuff that works and expect it to keep working), they will have to pay up at least until the elections. Then they will be compensated and rewarded after that.

Orbánists haven’t heard of the market and haven’t done honest business in their entire life. Someone should tell about their creepy cronyism to the alleged conservatives of the west who uphold this mafia as a role model for their countries.