What is nasty opportunism from a pigeon is regarded as cleverness from a songbird.

It all started with Destroyer, the great tit. 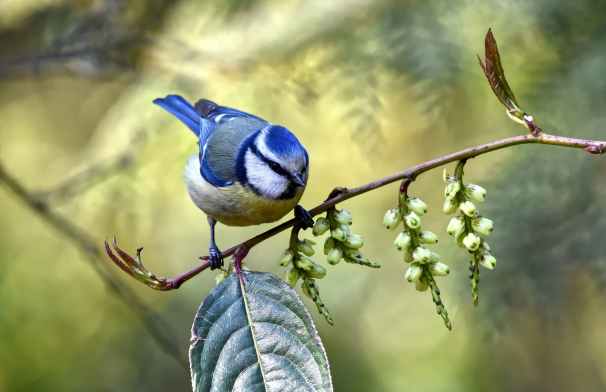 This is not Destroyer, not even a great tit, but a stock photo of a blue tit. Still cute.

Destroyer came to my balcony one autumn morning, determined to destroy my outdoor chair cushion. He spent hours trying to do some damage to the offending cushion, and kept coming back every time I shooed him away. His little buddy was egging him on and keeping watch.

Eventually I grew concerned about Destroyer’s health (he might get an aneurysm from all that rage) and took away the offending cushion. As a gesture of reconciliation I replaced it with crushed nuts on the window sill. It was an instant hit with the birds.

Little did I know that it was the beginning of my winter of bird feeding. The next morning little beaks woke me up pounding on my window. The day after they were yelling at me to wake up and feed them nuts already. I told them that if I find out who did the loud shouting I will hang his feathery ass on the Christmas tree – but they knew I was bluffing. They are not afraid of me.

Destroyer has five fellow great tits who live with him on the tree outside my window. They teamed up with two blue tits for the winter, scavenging for food. The tiny little birds are bona fide predators during the summer, eating worms and insects (their little yellow wests get their color from one particular caterpillar they eat, which I find hilarious), but they resort to oily seeds in the winter, desperately trying to maintain their body fat to survive the punishing winter nights.

Tits are far from innocent little songbirds (if we apply our jilted catholic morality on them). They were caught killing and eating hibernating bats and murdering other birds when emotions get high near bird feeders. We love them because they are cute and colorful – but they are far from rare or endangered. Indeed, they are classified as “No concern” on the endangered bird list.

Eight little birds barely make a dent on my nut reserves. On a good day they eat a whole walnut between them, sometimes only a half. They live on the tree on the little square my balcony overlooks and regularly come and knock on my window to guilt me for more walnuts.

The bird population of my square consists of:

There are the occasional redstarts and robins – but they seem to be intimidated by the vicious little tits. The crows are largely indifferent to the bird feeder and the magpie only visits occasionally in search of something – anything – to steal. It’s more of a hobby, really. (The other day he took off with a cube of butter and the outraged blackbird chased him up the tree and away from the square – even though blackbirds don’t eat the butter. It is for the songbirds.)

In the end the abundance of seeds and options on my balcony made for a very lucky little group of tits and blackbirds who now feast there all day, every day. I can’t help but wonder if I created a gang of delusional little boasters who go around in their yellow success vest, telling everyone that nuts are easy to come buy and if they don’t have nuts, it is all their fault. It works like that with men and public money these days.

It would be a jolly little balcony if it weren’t for the pigeons. Pigeons are not only twenty times larger than songbirds, eat a lot, and they are bullies. If you start feeding them you will end up feeding only pigeons pretty soon. They come in groups and crowd out every other bird from the feeders. Did I mention that they also poop a lot?

It would be incredibly expensive to keep so many pigeons on a crushed walnut diet. Those who feed pigeons in the square regularly bring entire loaves of bread. The equivalent in pricey nuts would be excruciatingly expensive.

So are pigeons discriminated against due to their size and their numbers? Are we feeding little songbirds because it is adorably cheap to keep them lucky and happy all winter? Or do we hate pigeons for something more?

Pigeons have literally nothing better to do all day than wait and watch my balcony from their perches across the square. Even if I keep shooing them away, they will always turn up and give it a go from time to time. Maybe they can steal a nut before I notice. Maybe they can tip over the feeder to get just one bite before I start banging on the window. Maybe I am in the kitchen and don’t catch them as they vacuum up the little nut of the songbirds who will watch in horror as their precious treasure is being depleted by huge mother ships of birds.

I also noticed that pigeons are faster to bolt and more aware of being hated than songbirds. A blackbird stares me in the eye in the hope I will just go away and let him eat his tasty red apple – while a pigeon bolts at the mere sight of the curtain moving. Even the sparrows are visibly more frightful than the (much smaller) blue tits, even though I never chase them away. (Sparrows are in heavy decline in Europe, the reasons are unclear.)

It puts me to shame to chase away animals that are already so used to being chased away. It is like racism – or the negative discrimination of a species based on their size and number, if you like. And it is self-reinforcing as well, as the pigeons are ready to topple the feeder just to get one bite in. What else can they do (with my feeder) if I don’t let them?

What is nasty opportunism from a pigeons would be regarded as clever perseverance from a songbird. If a songbird keeps coming back despite the regular failures, I would admire her strength of will. What is cheeky from a pigeon is regarded a sign of intelligence and cleverness from tiny songbirds. If the songbird learns that she must knock on my window and sit in the feeder tray to signal to me that she wants walnuts, I can’t resist. If the pigeon would do the same, he would be aggressively shooed away.

Indeed, pigeons have learned that they must come 1) one at a time, 2) without any noise, and 3) stay as low and close to the wall as possible to avoid detection. They even break away from their flock to opportunistically feed on the only bird feeder in this downtown square.

Pigeons are bullies. But so are blackbirds and I feed those. On one occasion I saw the blackbirds chase away the redstarts for no reason, since they don’t even eat the same food. So no, it is not even about their temperament – not that a bird can be blamed for that.

I feed the blackbirds because they sing like a god in the spring. It stems from a treasured memory. Once I was awaken by a blackbird who chose to greet the sunrise from my open window – at 4am in the morning. The sound explosion coming out of that little bird was phenomenal. It startled me so hard I nearly fell out of my bed. Only someone who heard a blackbird singing in a small, confined space can imagine what it was like so let me just state that a hypersonic jet breaking the sound barrier has nothing on a blackbird who has something to say. I sat on the floor, next to my bed for a long time, listening to the ear-splittingly loud but beautiful bird song, mesmerized. So I guess the blackbird can stay – even though he is a bully to smaller birds and he poops as much as pigeons do.

Do songbirds simply do less damage? Is it due to their size and small numbers? Do we hate pigeons simply because they are numerous and relatively large? After all, humankind sent most large animals extinct.

And what is it with the toilet etiquette? Songbirds never poop on my balcony. Not once. The pigeons, on the other hand, can’t seem to exist without constant diarrhea.

And before we bash the pigeons too hard for their rat-like demeanor, it is important to remember that pigeons raised as pets or even for racing have a different attitude. So the way they are approached also shapes them – and then it shapes how they are approached.

Calling the pigeons flying rats is also based on a stereotype – against rats. But those who trained and befriended rats know that they are quite clever and display social behavior, just like humans do.

And finally, on human behavior. I started this post before Christmas and I wanted to end it with some cute anecdotes about my new feathery mafia, the magpie that keeps stealing butter, the blue tit that fell asleep in the feeder after she ate too much, and the pigeons who try to get into the feeder in farcical ways – but I can’t bring myself to do it now.

On New Year’s Even the humans who flocked to Budapest to get aggressively drunk and celebrate their non-achievements of 2021 fired fireworks in this square (everywhere in town). It was a proper world war for the birds, many of whom are smaller than a single firework sparkle. When I tried to send away the raging human animals that did this on my square they became aggressive, they talked about their “rights” and they demanded proof that the fireworks actually kill the birds – or they just chase them out of town. On a cold winter night, in the dark when they never fly, and to a territory where they do not belong. In utter panic and amidst rapid fire coming from every direction.

The humans didn’t stay to check the dead birds on the ground the next morning so they are probably still yapping about their rights somewhere. All I wish for them in the new year is not to die, just to be forcibly chased out of their homes in the middle of the night, in sheer panic and amidst cannon fire. As a species, one should be the most prejudiced against humans.