EU funds have become a classic example of a resource curse for Hungary.

International aid is not so different from finding oil under a third world country: the unearned money goes to the rulers of the land, whom in turn, fail to pass it on to the people. Why would they? Such easy money is rather used to build a system of top-down dependence and to be stolen, pure and simple.

I have come across two sets of statistics the other day. One was detailing what portion of the Russian natural resource wealth was simply stolen by Putin-made oligarchs – the other did the same but with EU money and Orbán-made, Hungarian oligarchs.

According to data published on g7.hu only 24 oligarchs own 22% of the Russian GDP. And that comes after countries like Cyprus and Georgia that beat this proportion by just one oligarch owning more of the GDP and tax havens like Monaco and the Cayman Islands.

The revenues in Russia going to the top one percent are comparable to that of the United States – but there is the tiny difference that almost all of this is politically gained wealth, and often with mafia methods. Hate Bezos and Musk all you want but they didn’t suck their astronomical wealth out of taxpayer pockets or directed the revenues from their country’s oil sales into their pockets. Most of what they have went to their pockets through voluntary transactions – i.e. they earned it.

The article also quotes a study that estimates the amount of Russian wealth going abroad (to buy up yachts and luxury estates London and the Riviera) at 10% of the Russian GDP by 2013. And the real theft only kicked off later. The proportion of wealth kept offshore was also outstanding in the case of Russia. And the Hungarian government happily helped them gaining EU residency by their residency bond program that allowed 20 thousand people into the EU with many high-ranking Russians and their families included.

How does Hungary compare? Naturally, there is no exactly comparable data just because you wish to read a comparison of apples to apples. But this is where the comparison of oil money to EU money comes in handy. Orbán could never have built up his own top-down autocracy without the avalanche of EU funds that he could distribute along political lines in a clientelist system.

We now have a rough idea just how much of EU funds went straight to the known companies of just a handful of oligarchs (and that is a very cautious way of counting it) and without any competition.

The Corruption Research Center in Budapest published data showing that only 42 companies, belonging to just 12 men won 21% of all available tenders of EU funds between 2011-22, the Orbán-years. (3300 companies share the remaining 80%.) Their chances of winning attenders that distribute Hungarian funds is even higher. 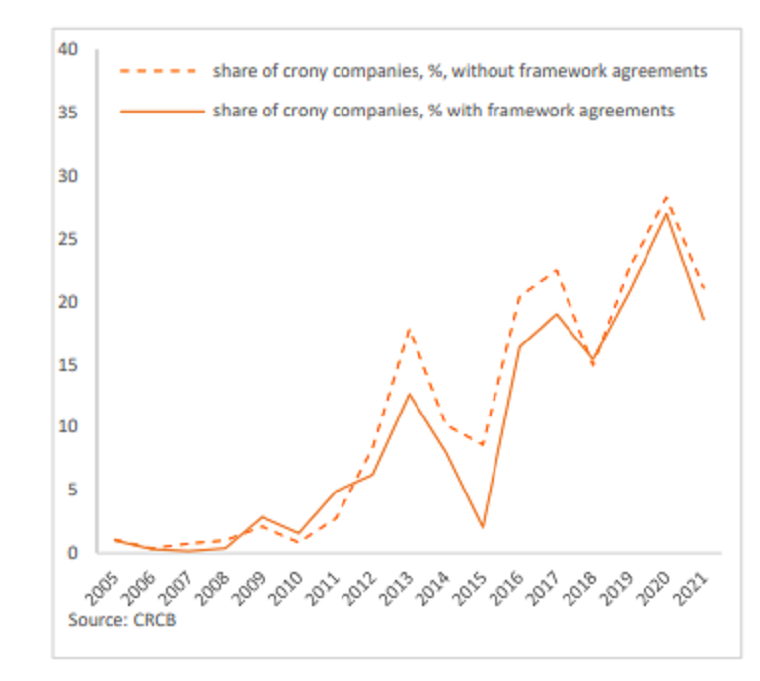 There were two visible events in kleptocratic statistics:

In this story the oligarchs are no longer the kingmakers. That is an old notion – time to put to rest. Putin has learned his lesson and broke the neck of the original oligarchs who used to be independent. The pinnacle was the imprisonment of Khodorkovsky as early as in 2004.

And when Orbán became Putin’s acolyte in 2014, Orbán also got rid of the oligarch who made him, within a year. Almost as if he was following the lessons given to him by Putin. (The fired oligarch also blamed the Russian thread for his falling out of grace.) There were even a few, lower level oligarchs falling out of Orbán’s favor – sending the message that no one is too powerful to be financially annihilated if he falls out of grace. And the oligarchs got the message – not least because so many of them are related to the Orbán family or old friends and business associated thereof.

A short history of Orbán & Putin – A love story

The resource curse does more damage than just letting the politically connected fronts and family get rich and run away with it. It also stifles innovation and modernization.

Just take someone like Musk. Had he been successful with his first enterprises in a kleptocracy, despite the red tape and the archaic approach of ever-present authorities, his business would have been coveted by a rich crony. Then you have to sell, and then the business will no longer thrive because these cronies only imagine that they are as talented as they are rich. In reality they have no idea how to run anything, let alone building an enterprise. Someone like Musk would then have to step aside or leave and start over abroad, in the rotting, declining, stinking west, with gender craze and all.

Then there is the small issue of sucking the life force out of society. Not only do these cronies dictate an Instagram lifestyle that corrupts the value system of entire generations. They also suck the money out of the system that would create a middle class one day.

The money not paid to education will make the best teachers leave – and then pretty much everyone else. Kids will be left semi-literate and uncompetitive. Both at home and elsewhere in the world. There will be no little math geniuses polishing up the country’s science reputation. There will be no engineers that can use more than just duct tape. The brain drain in such a society is vicious. And those uneducated masses it creates? They will be the best audience for national grievances against the outside world they don’t understand but envy.

Then there is healthcare which is always the last to get financed in kleptocracies. Sick slobs are the least likely to rock the boat and challenge the regime, and their nurses are just too busy keeping the misery running to protest for better supplies and wages. In a corrupt system everything will be stolen, from tank parts to money sent to feed soldiers. And the red tape gets so much thicker because every official tries to get a side hustle abusing any little power he has.

The cost of kleptocracy is enormous. And the cause is oil money for Putin and EU money for Orbán. Dumb money and unearned wealth leads to a lazy and corrupt political elite, dreaming about an imaginary glorious past. And autocracy, of course.